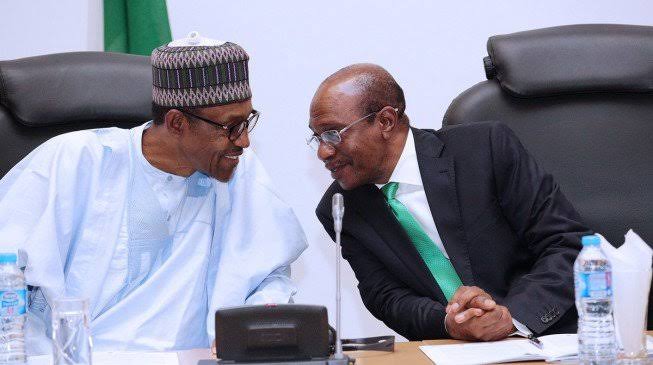 The governor of the Central Bank of Nigeria (CBN) Godwin Emefiele on Thursday met with the President, Muhammadu Buhari.

Details of the meeting which held at the Aso Rock Villa have not been made public, but it is the second time Emefiele would be holding a meeting with the president since he returned from his vacation abroad.

He had earlier joined a delegation of the Arab Bank for Economic Development led by its Director General, Dr Sidi Ould Tah, on visit to the president.

Emefiele had quietly returned into Nigeria, weeks after the Department of State Security (DSS) had reportedly set in motion, moves to pick him up on allegations of terrorism financing.

The embattled CBN governor resumed work last Monday amid speculations that his position in the apex bank was under threat.

The DSS had recently approached the court to arrest and detain the CBN Governor over alleged terrorism financing.

A Federal Capital Territory (FCT) High Court sitting had restrained the DSS from arresting the governor.

The CBN had announced that the governor was out of the country after failing to appear before the House of Representatives which summoned him over some policies of the bank last year.