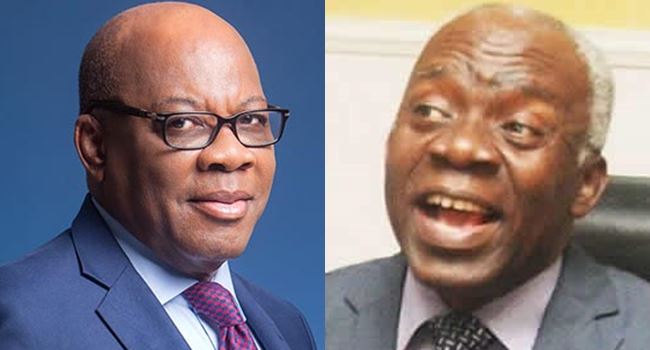 A group of eminent Nigerians, under the auspices of Concerned Nigerians, has reeled out a solution out of the issues thrown up by the #ENDSARS protests and the ensuing violence in parts of the country.

The group, which has the likes of Dr. Olisa Agbakoba, Prof. Jubrin Ibrahim, Bishop Matthew Hassan Kukah, Prof. Attahiru Muhammadu Jega, Funke Adekoya, Prof. Joy Ngozi Ezeilo, Mr. Femi Falana SAN and 34 others, are of the opinion that the Federal Government under President Muhammadu Buhari must take immediate action in stemming obvious descent into anarchy and breakdown of law and order.

According to the group, in a statement issued on Thursday, government must identify and arrest immediately the persons that gave instruction for soldiers to shoot protesting youth at the Lekki Toll Gate on 20th October 2020, while also instituting an urgent independent inquiry on the events at Lekki toll gate leading to the use of live ammunitions on the protestors and the apparent use of sponsored thugs or hoodlums by security operatives to infiltrate and break the peaceful protests.

The statement reads in full: “We are responsible and patriotic Nigerians who have watched with serious concern the unfolding crisis threatening to engulf our nation. This has followed the recent protests by Nigerian youth across the country, against widespread police brutality, endemic corruption, and bad governance. We are non-partisan actors who believe in the union of our people through the maintenance of democratic order founded on the rule of law. We believe in the freedom of all Nigerians to exercise the rights guaranteed in our constitution, including freedom of speech, the right to participate in peaceful protest and in processions without harassment or intimidation from any person or authority.

“The developments of the last weeks culminated in a deadly attack on peaceful protestors, which from available evidence appears to be by agents of our government on 20th October 2020 present one of the most serious crisis in our nations history. At the root of these protests by our youth is bad governance and lack of accountability. Currently, 65% of Nigerians are young persons under 35 years of age. Majority do not feel that Nigeria works for them or supports their interests or aspirations. They have been victims of police brutality and extortion all their lives and collectively decided the situation was no longer acceptable. It was on that basis that they began the EndSARS protests to end police brutality and ultimately to defend their basic rights, including the fundamental right to life. From all accounts, their protests were peaceful, and disciplined. They were focused on defending the rule of law and good governance, on many occasions symbolically raising the national flag or singing the national anthem.

“The response of the Government to these protests has been largely slow, unconvincing, and half-hearted. By formally accepting the youth’s demand to end

“SARS but immediately announcing it would be replaced with SWAT, that did not demonstrate good faith. This has happened several times previously when our youth had protested police brutality and extortion. With no credible response and with no basis for trust in the willingness of their government to address their real grievances, they continued their protests.

“There are widespread allegations and some available evidence would appear to support this, that agents of government or other affiliated political actors sought to break the legitimate protests by the youth through sponsoring or promoting thugs to attack the protestors and damage properties which were then attributed to the youth protestors. Some evidence also suggests that there are attempts to delegitimise the protests by seeking to divide and rule the youth through ethnic and religious manipulation. This makes the situation very dangerous for the country. This divisive and cynical approach, if established, portends great danger to the nation and is unacceptable.

“A cynical and brutal response, to the protests by the government or its agencies will only succeed in taking the agency of these protests from the hands of concerned, peaceful, orderly protesters for the rule of law and delivering our streets to the hoodlums and arsonists as is currently unfolding.

“With over one hundred million people living in extreme poverty, Nigeria cannot afford to tread the path of exacerbating ethnic and religious divides which can only lead to anarchy. Any response from the government agencies or indeed any group, that suggests this, must be condemned strongly.

“On Tuesday 20th October 2020, the nation was rudely shocked by what appears to be a premeditated violent crackdown on the protestors thereby significantly escalating the volatile situation. Earlier on that day, the Lagos State Government had declared a 24-hour curfew which would take effect from 4pm. According to reports, as the deadline was not practical, the state government extended the time for compliance to 9pm. However, before the reviewed curfew time, armed men in the uniform of the Nigerian military were deployed to the protest site at Lekki toll gate in Lagos. Available evidence suggests that they did not order the crowd to disperse and they did not engage in non-lethal crowd dispersal action, but rather opened live ammunitions on the defenseless assembled youth, some of whom were reportedly killed or wounded. This attack on unarmed protesters holding the nation’s flag and singing the national anthem will go down in infamy and will be engraved in the minds of Nigerians as one of the worst abuses of its own citizenship.

“No Nation can survive a war between its security agencies and its youth, and it is to avert this prospect that we make this intervention and recommend the following urgent action.

“Having carefully observed and followed these unfolding events, and to halt our descent into further break down of law and order, we call for urgent steps to be taken by all concerned.

“1. We call on President Muhammadu Buhari to take immediate urgent steps to address the widening trust deficit between the Government and the President on the one hand, and the Nigerian youth and its people on the other. To move forward, the President must take decisive action to close the trust deficit by:

“a. Identifying and arresting immediately the persons that gave instruction for soldiers to shoot protesting youth at the Lekki Toll Gate on 20th October 2020.

“b. Institute an urgent independent inquiry on: (i) the events at Lekki toll gate leading to the use of live ammunitions on the protestors and (ii) the apparent use of sponsored thugs or hoodlums by security operatives to infiltrate and break the peaceful protests. All those identified to be responsible for this must be held to account and prosecuted.

“c. Take immediate remedial action as spelt out in the youth Charter of Demands (which they term 5For5 Demands) including the immediate release of all arrested protestors, justice and compensation for the families of victims, and an independent body to oversee the prosecution of guilty officers.

“d. Address the Nation with concrete plan of implementation of the modalities and timelines for police reform.

“e. Respond positively to the consensus opinion that the heads of the security agencies have performed poorly and should be relieved of office.

“f. Announce urgent steps to address perennial insecurity and killings in the country particularly in the North-East and North-West.

“g. Finally, develop a clear workplan for the implementation of the governance reform programmes for which well meaning Nigerians have been demanding.

“2. We commend our youth who have been courageous and patriotic in their demands for the protection of their rights and for a better Nigeria. We urge that all Nigerians support these demands which have been without any ethnic or religious coloration.

“3. We urge the protestors to remain law abiding and patriotic and not to engage in any intimidation or harassment of ordinary citizens or engage in any form of violence. We appeal to parties and stakeholders to work for speedy resolution of the crisis.

“4. We strongly condemn the wanton destruction of properties, killings and maiming of innocent citizens and ethnicization by rioters and hoodlums trying to ignite a religious or ethnic conflict and call on ALL Nigerians to remain calm and avoid retaliation or taking the law into their hands.”