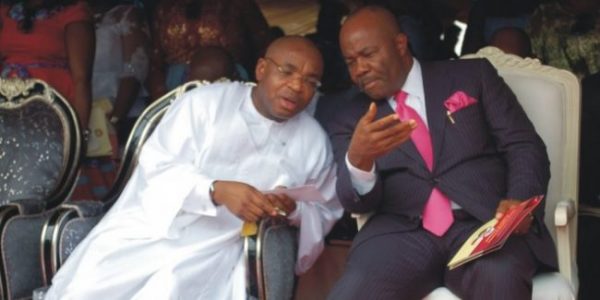 Udom Emmanuel, Governor of Akwa Ibom State, has fired back at former governor Godswill Akpabio who said he regretted making him governor, branding the decision a mistake.

Udom said his achievements in office prove that he is not a mistake.

Akpabio, who recently defected from the Peoples Democratic Party (PDP) to the All Progressives Congress (APC), said this at a rally in Ikot Ekpene.

Responding through Charles Udoh, his commissioner for information, the governor said Akpabio has mortgaged his conscience.

“A governor that records the achievements despite the challenges of an epileptic national economy cannot be a mistake,” Udoh said.

“I doubt if there is any first term governor in Nigeria who has recorded this level of achievement. Godswill Akpabio spent eight years as commissioner under Obong Attah; spent eight years as governor at the height of the state’s income receipts from the federal government yet he couldn’t complete Uyo-Ikot Ekpene road (the road to his village) despite appropriating almost all the sums budgeted for the project.

“Godswill also commissioned an uncompleted building with rented furniture and fitting and called it 4 Points Sheraton Hotel. Udom has, as at today, facilitated the setting up of more than nine industries in just three years; Godswill spent eight years with zero industry.

INSECURITY: We’re worried by North-East but pleased with gains in Benue, Zamfara— FG

I believe in Buhari, I’ll finish my political career in APC— Adamawa Gov