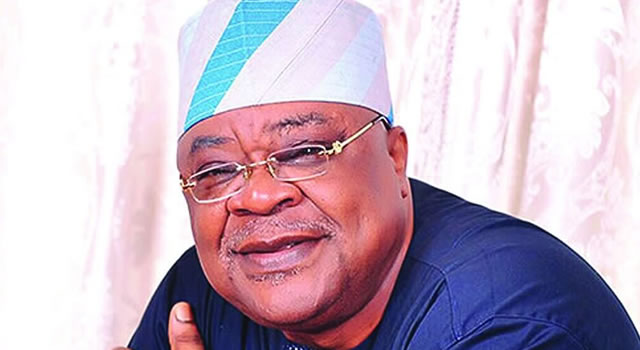 Former Oyo State Governor, Adebayo Alao-Akala has frowned at a statement credited to Governor Seyi Makinde in which he described former governors of the state as charlatans, saying the statement was uncharitable and unstatemanly.

Alao-Akala, stated this while speaking with journalists on Thursday in Iseyin, at the empowerment programme organised by the Senator representing Oyo North Senatorial District, Fatai Buhari.

Reacting to threats that he would be voted out of office in 2023, Governor Makinde had said that his detractors lacked political relevance and that the state would never again be governed by charlatans.

Makinde said: “Let me sound this: if I will not seek re-election, I am sure that Oyo State will never, again, be in the hands of charlatans.

“So, calm down. It is even too early to start talking about a second term. Some parties that do not have even one councilor are saying that they will send me out of the Government House in 2023.”

Alao-Akala, while fielding questions on what he feels about Makinde’s statement, said it was immature for the governor to have said what was credited to him.

He said: “I don’t believe he (Makinde) said that. But if he said that, he made a mistake. You don’t address your predecessors as charlatans.

“You don’t do that. It is unstatesmanly and uncharitable. You just have to talk like a statesman that he is going to be a statement after he must have left office.

“You would see the way we have been addressing him. None of us who has been in that office before has ever said that he is not doing very well.

“He is doing his best. The best may not be enough for the people. When it is time for the campaign, we will campaign. But don’t use that word ‘charlatan’ it was unstatesmanly for him to have said that.”

Murray out of US Open, admits winning another Grand Slam will be tough