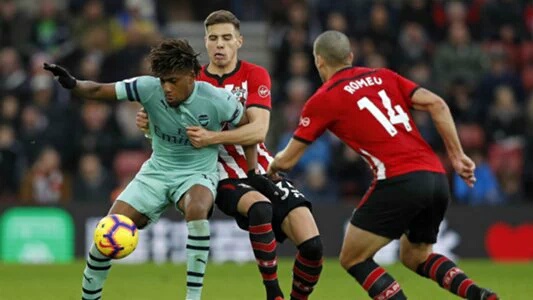 Despite facing defeat at Southampton on Sunday, Arsenal having gone 22 games unbeaten in all competitions deserve some accolades, according to Super Eagles forward, Alex Iwobi.

The Gunners were stunned by the Saints in a Premier League clash after a Charlie Austin’s 85th-minute header granted the hosts a 3-2 victory.

After losing two games at the start of the league season, the Unai Emery side had gone on to win 10 matches and draw 4 before losing again on Sunday.

22-year-old Iwobi, who has been a key player in the team, blamed lack of concentration for their loss, but says his side have to give themselves credit for the good run this season.

“I guess we weren’t concentrating throughout the 90 minutes,” the 22-year old said after the game.

“We had spells where we weren’t defending well as a group. It’s something we have to dust ourselves down from and keep on going. We can’t let our heads drop from this defeat, we just have to push on to the next match.

“Frustration that it (unbeaten run) is over. We had a lot of chances to win this game, I believe. But we have to give ourselves a bit of credit that we were able to go on this unbeaten run and now we have to start over again.”

He added: “Of course, they (Southampton) deserve some credit. They had a gameplan and they stuck to it and did well against us. But it’s disappointing from us and we have to keep going again.

Iwobi is confident that Arsenal will bounce back and start to run again.