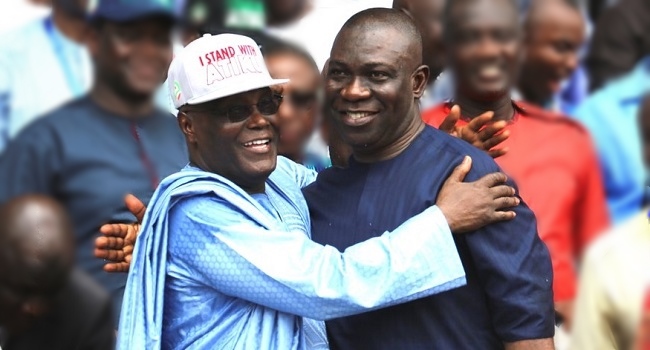 In a clear move to placate Deputy President of the Senate, Ike Ekweremadu, the presidential candidate of the Peoples Democratic Party (PDP), Atiku Abubakar, last Monday paid him a visit, it was learnt.

Ekweremadu, who allegedly had worked to ensure Atiku emerged the presidential candidate of the PDP during the party’s recent convention in Port-Harcourt, Rivers State capital, was said to have felt very disappointed when Atiku chose Peter Obi as running mate instead of him.

Reports in some quarters claimed the development was what made Ekweremadu and the South-East governors under the party’s platform initially frown at Atiku’s choice of Obi, who is a former governor of Anambra State.

Reports had also suggested that Ekweremadu, may be on his way out of the party. Even after he denied the rumour, the lawmaker recently led governors of the South-East to visit and applaud President Muhammadu Buhari at the Presidential Villa, Abuja, a move many found inconsistent with an opposition bigwig in an election year.

Apparently understanding the chameleonic nature of Nigerian politicians, Atiku, in company of the director general of the PDP Presidential Campaign Council, and President of the Senate, Bukola Saraki;  national chairman of the party, Uche Secondus; and the national organising secretary of the party, Col. Austin Akobundu (retd.), is said to have visited Ekweremadu to appease him, and probably beg him to have a rethink on his activities that the hurt the party’s chances at the 2019 elections.

Their mission it was also learnt, was to try and make him see reasons Obi was chosen as the party’s vice presidential candidate.

READ ALSO: I remain in APC even though it has lost integrity —Okorocha

Part of the reason given to Ekweremadu it was gathered was that Obi does not have any corruption case and he does not belong to any faction of the party.

Atiku and his entourage were also said to have explained to the deputy Senate president that the choice of Obi has helped in increasing the acceptability of the former ruling party across the country.