'Benue belongs to Buhari..he can do whatever he wants'- Ortom | Ripples Nigeria 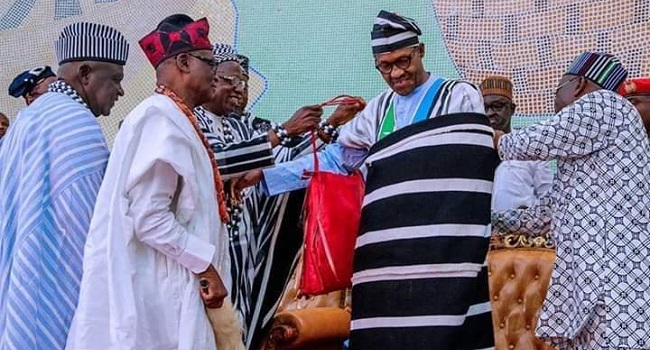 Samuel Ortom, Governor of Benue State, struck a conciliatory and welcoming tone as he received President Muhammadu Buhari in the state on Wednesday.

He said Benue belongs to the president and he is free to do whatever he likes there.

Ortom said this at the Nigerian air force base, Makurdi, the state capital, while speaking with journalists on Wednesday.

The governor was at the base to receive the president for the state’s All Progressives Congress (APC) presidential rally.

“He is the president of the Federal Republic of Nigeria and whatever he is doing, it is our responsibility to give him adequate protocol,” he said.

“He is our president, and this is beyond party… so I am doing all the needful. There is no special thing in what I am doing, it is what I am supposed to do as governor of Benue state irrespective of party because he remains my president and I respect him.

“I have no personal issues with him; we talk about policies and issues there is no personal grudge. So, I am here to receive him, and I have made adequate arrangement. This state belongs to Mr President. So he has access, he can be here and do whatever he wants.”

Ortom defected from the ruling APC to the Peoples Democratic Party (PDP) in 2018, a move that completely put him at odds with the federal government.

Benue is one of the states severely affected by the herdsmen-farmers clashes, an issue that has dominated Ortom’s heated confrontation with the federal government.