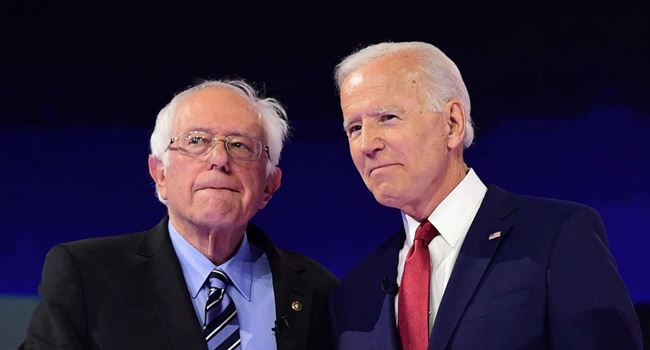 Two Democratic candidates for the presidency, Joe Biden and Bernie Sanders both tore into President Donald Trump’s handling of the outbreak of the deadly coronavirus also known as COVID-19.

Both candidates during a Democratic debate on Sunday criticised the US President for downplaying coronavirus risk while they also offered competing visions of leadership during a widening crisis that has upended the daily lives of Americans.

Biden, the frontrunner, recounted his experience as serving in President Barack Obama’s administration in dealing with the Ebola outbreak in 2014 while also laying out a coronavirus plan to make testing free and widely available, establish mobile sites and drive-through facilities in each state.

He said he was willing to call out the military to help local officials build hospitals and take other necessary relief steps.

“This is like a war, and in a war, you do whatever needs to be done to take care of your people,” Biden said.

Sanders on his part suggested the first step in responding to the outbreak would be “to shut this president up right now” because he was undermining the response of public health officials.

“We have got to learn that you cannot lie to the American people. You cannot be less than frank about the nature of the crisis,” Sanders said, adding the crisis showed the need for his signature Medicare for All healthcare proposals, which would replace private health insurance with a government-run system.

“Let’s be honest and understand that this coronavirus pandemic exposes the incredible weakness and dysfunctionality of our current healthcare system,” he said.