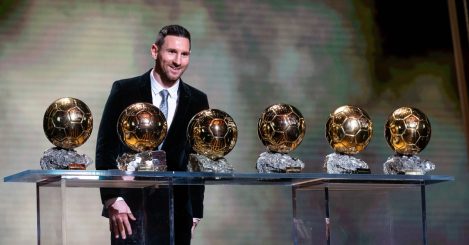 Paris St-Germain and Argentina forward, Lionel Messi has been crowned winner of this year’s Ballon d’Or after he beat 29 other players to the title.

Messi is winning the Ballon d’Or, a title awarded to the best player on the planet for the season, for a record-extending seventh time.

The 34-year-old helped Argentina win this year’s Copa America as they defeated Brazil in the final in July, which also meant Messi’s first major international trophy.

The star forward left Barcelona this summer after the Spanish side failed to keep him following the end of his contract, as he joined Paris Saint-Germain.

In his final season with Barcelona, Messi had another brilliant individual campaign despite Barca’s struggles.

As well as breaking Pele’s record of the most goals for one club, Messi became the first player in history to score at least 20 goals in 13 consecutive seasons in Europe’s top five leagues.

He also broke Gerd Muller’s record of scoring 30 plus goals in 12 consecutive club seasons, as well as surpassing Xavi’s record for most Barca appearances.

In the ranking, Robert Lewandowski came second, followed by Jorginho and Karim Benzema while the N’Golo Kante finished on fifth spot.

For the women’s category, Barcelona and Spain forward Alexia Putellas was crowned the best player, becoming the third ever woman to the win the Ballon d’Or.

Putellas was one of five Barcelona players nominated after their first Champions League triumph, as well as winning the Primera Division title.

There were other awards grabbed on the night, with Barcelona and Spain midfielder Pedri winning the Kopa Trophy for the best player under 21.

The 19-year-old played an unbelievable 73 games for Barcelona and Spain, including Euro 2020 and the Olympics last season, and also helped Barca to win the Copa del Rey.

As well as winning the German Bundesliga title with Bayern Munich, Lewandowski won the European Golden Shoe, and broke Gerd Muller’s 49-year record of Bundesliga goals in a campaign.

Meanwhile, Italy’s goalkeeper Gianluigi Donnarumma won the Yashin Trophy for the best goalkeeper in the world, beating Chelsea and Senegal’s goalie Eduoard Mendy to the title.

Donnarumma helped Italy win the rescheduled Euro 2020 tournament, and was the only goalkeeper to be nominated for the Ballon d’Or – so his win was not surprising.

The PSG goalie conceded four goals in seven matches in the tournament and saved two penalties in the Azzurri’s final shootout win over England, which gave Italy a first European title since 1968.

And lastly, European champions Chelsea were named club of the year, the first team to win that trophy.

Neymar out for eight weeks with ankle injury