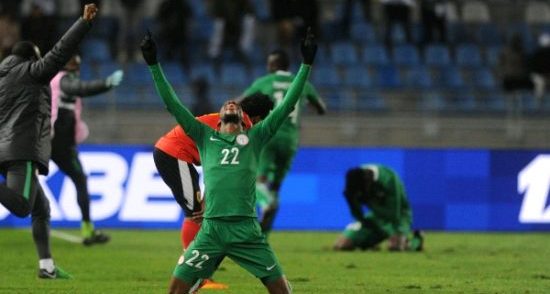 President Muhammadu Buhari has congratulated the home-based Super Eagles of Nigeria on their victory over Sudan in the semi-final of the 2018 Championship of African Nations (CHAN) in Marrakesh, Morocco.

The Nigerian home-based Super Eagles had edged out Sudan the encounter to set up a clash with host nation Morocco in the final.

The Eagles beat the Sudanese 1-0 on Wednesday night, after holding on to the lead from the 16th minute when Gabriel Okechukwu slotted home Anthony Okpotu’s flick on.

Both teams were later reduced to 10 men as Nigeria’s Ifeanyi Ifeanyi and Sudan’s Bakri Bachir was sent off.

The Eagles were forced into an early change in the 11th minute when goalkeeper Ikechukwu Ezenwa was stretchered off due to an injury.

The Enyimba shot-stopper collided with Stephen Eze as they both attempted to stop a Sudanese attack, and he was replaced by Dele Ajiboye who kept the goal safe throughout the game.

Having finished as second runners-up at the 2014 edition and failing to make it past the group stages in 2016, this is the first time Nigeria is reaching the final of the tournament.

In the other semifinal match earlier on Wednesday, Morocco overcame Libya 3-1 after extra time in front of a packed crowd in Casablanca, to seal their spot in Sunday’s final.

Both Nigeria and Morocco are reaching the final of the CAF competition for the first time, and they will lock horns on Sunday at the Casablanca stadium.

While celebrating the dogged performance of the team, President Buhari in a statement by his Special Adviser on Media & Publicity, urged the players and the coaching crew to remain focused and determined as they go for Gold in the final match on Sunday.

The President assured them of the unflinching support, goodwill and prayers of the Federal Government and all Nigerians as they soar to victory.