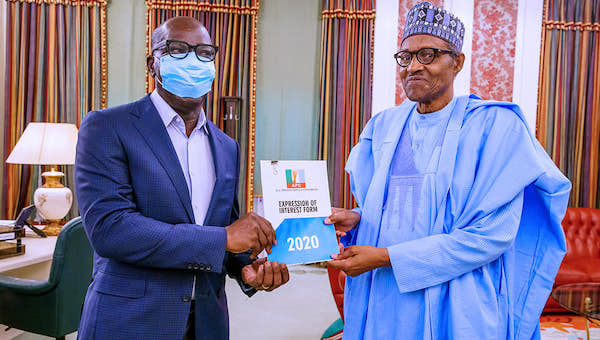 The meeting which was at the instance of the governor, came ahead of the June All Progressives Congress (APC) governorship primary in the state.

In a chat with State House correspondents at the end of the meeting, Obaseki said he was in Aso Rock to formally intimate the president of his intention to seek re-election as governor of Edo State on the platform of the APC.

The governor, who at loggerheads with the APC National Chairman, Adams Oshiohmole, over his second term ambition, presented his Expression of Interest form to the president for blessing.

He said: “I came to see Mr. President to formally inform him of my desire and intention to seek re-election as governor of Edo State on the platform of the APC in the forthcoming gubernatorial election.

“As a father of the country, as our president I should not just assume or take things for granted. I have to come to inform him and solicit his support in my gubernatorial bid, and the president was quiet warm and quiet welcoming.

“When I showed him my Expression of Interest form, he looked through it and teased me that he would not have to go through this again and wished me good luck and assured me of his support.”

On the political tussle in Edo, the governor said the crisis was being instigated from outside the state.

He also described the misunderstanding between him and Oshiohmole as very unfortunate, saying however that he was ready to reach a truce with all aggrieved members of the APC.

Obaseki added: “It is unfortunate that he (Oshiohmole) is taking the position he has taken. I believe that he was not properly guided.

“I am his governor and it is my responsibility to seek peace for my state and with all my citizens.

“The relationship is still frosty but I am doing all I can to try and make it warm just for the sake of Edo people. I am committed to whatever it will take to have peace and not to lose lives in Edo, within the law, whatever I can do that is constitutional, I will do.”