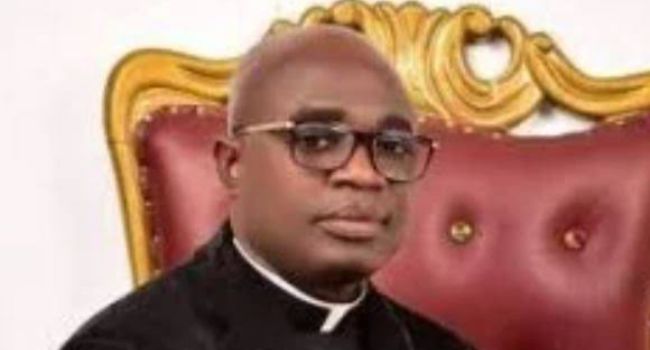 A Catholic priest in Benue State, Rev. Father Hyacinth Alia, has been suspended indefinitely by the Gboko Diocese of the church for declaring his intention to run for the position of governor in the state in the 2023 elections.

Rev. Alia had reportedly picked up the governorship form of the All Progressives Congress (APC) after paying the N50 million fee and had been cleared by the ruling party to participate in the party’s primary alongside 11 other aspirants, but the church was of the view that he erred in going into politics as an ordained priest.

In the suspension letter signed by the Bishop of the Gboko Diocese, Bishop William Avenya, and dated May 20, 2022, the church announced that Rev. Alia has been suspended from public ministry after a series of admonitions to him were ignored.

“I write to communicate to you the suspension of my priest, Revd. Fr. Hyacinth Iormem Alia from public ministry after series of admonitions to him,” the suspension letter addressed to the Catholic Bishop of Benue reads.

“The Mother Church does not allow her clerics to get involved in partisan politics on their own.

“You are aware that my son, your brother and your priest has purchased the party forms to contest for the Office of the Governor of Benue State under the All Progressives’ Congress which is totally against our vocation.

“Therefore, to respond to the spiritual and pastoral needs of the Church in the Catholic Diocese of Gboko, I have suspended him from the exercise of sacred ministry.

“This canonical suspension takes effect from the moment it is communicated to him and lasts until he ceases from contumacy.”

However, the head of Media and Publicity of the Alia 2023 Gubernatorial Organization, Kula Tersoo, while responding to the suspension of the priest, said he was only said suspended from celebrating public Eucharistic masses, but that he remains a priest of the Catholic Church forever.

“For the avoidance of doubt, Rev. Hyacinth Alia is only suspended from celebrating public Euchsristic masses. He is not suspended from being a priest of the Catholic Church and even when his tenure as a public servant, he shall resume his public masses and ministry. It was a normal practice of the church.

“Rev. Alia remains resolute as in his quest to redeem Benue people from bad governance and we urge his supporters not to be anxious because he is well prepared and focused after seeing the genuineness in agitations for him to step in and help salvage the situation in the state.

“You will recall that a former Governor of Benue State, the late Rev. Fr. Moses Orshio Adasu, who served as the second civilian governor was also a Catholic priest and had gone through the same process,” Tersoo said.

Related Topics:Catholic Church
Up Next