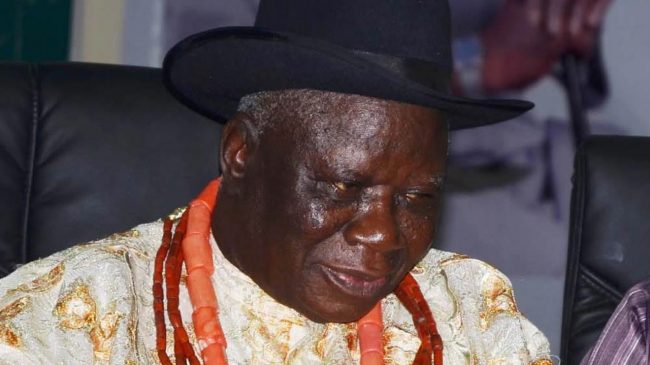 The Bayelsa chapter of the All Progressives Congress (APC) on Thursday accused the Edwin Clark-led Southern and Middle Belt Leaders Forum of being partisan in comments on elections.

The APC said this while reacting to a statement by the Southern and Middle Belt Leaders Forum entitled, “On Danger Signals from Rivers and Other States.”

The group said: “There has been a spillover of the Rivers situation to Bayelsa State where Mr Timpre Sylva of the ruling APC has also been alleged to be terrorising residents with impunity.

“We call on the President to call Messrs Amaechi and Sylva to order and restore normalcy so that the electoral process in Rivers State in particular can be concluded.

“Indeed, if we are a Republic governed by law, Mr Rotimi Amaechi and Mr Timipre Sylva should have been arrested by now for the wanton violence they have instigated.’’

Publicity Secretary of Bayelsa APC, Doifie Buokoribo, speaking for the party, noted that the statement was laced with malice and prejudice, stating that the APC finds the statement offensive, unwarranted, disgraceful and partisan.

“Like most Nigerians, we know it as a matter of fact that these are partisan elders on the side of the opposition Peoples Democratic Party (PDP).

“During the Presidential Elections, this group openly supported and campaigned for the defeated PDP Presidential Candidate, Alhaji Atiku Abubakar.

“In the specific case of Bayelsa State, if anyone needs to be called to question concerning the elections, that person is Governor Henry Seriake Dickson.

“The governor and his party, the PDP, were the ones that unleashed war and terror on our suffering people. And they were the ones spreading fake news to incite violence and try to cover up their evil activities.

“They were so wild and uncontrolled that even the military had to issue a statement a few days ago to call Dickson and the PDP to order.

“That statement was widely publicised by the local, national, and international news channels. It is surprising that the forum did not read such a crucial statement before reaching the conclusions in their statement.

“They just decided to pick and choose those to slander. But the thinking public knows Sylva is an innocent man. He is a man of peace,” Buokoribo stated.

The APC wondered why the elders failed to reach out to Sylva and hear from him on the allegations before releasing their statement. Buokoribo noted that the principle of fair hearing was because the APC leader had only “been alleged” to do the things they referred to in the statement.

He further stated that those making the allegation were known partisan participants in the said political contests.

“But, alas, the elders have been so compromised that they are determined to deny their target even the right of fair hearing.

“With elders like Clark and his group, it is not surprising that our communal governance structures have become comatose.

“The earlier responsible people in the region begin to dissociate themselves from the group’s divisive prejudices, the better for the South and Nigeria,” the APC stated.

PDP have met their match in President Buhari– Presidency