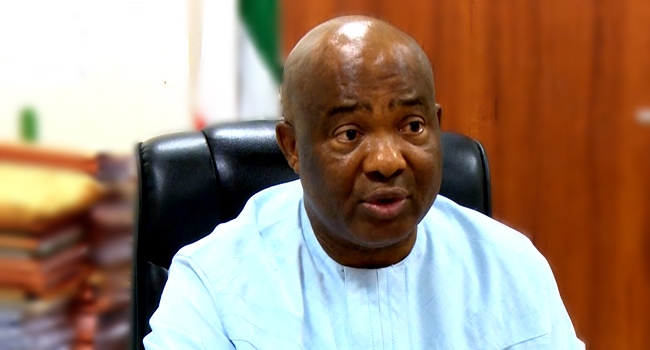 A Federal High Court in Abuja has threatened to issue an arrest warrant against the governorship Candidate of the All Progressives Congress (APC) in Imo State, Senator Hope Uzodinma should he fail to appear in court on April 18.

The Special Presidential Investigation Panel for the Recovery of Public Property (SPIP) had in October 2018 filed two-count criminal charge against the senator but had been unable to have him attend court to plea to the charge.

Lawyer to SPIP, Celcius Ukpong, on Friday, recounted efforts made by his agency since filing the charge, to make Uzodinma honour court’s hearing notices, but without success.

Ukpong told the court that the SPIP was also investigating the Senator representing Imo West in respect of a $10million contract for the dredging of Calabar Port, which he and his company allegedly failed to execute after being paid by the government.

He faulted a claim by Uzodinma’s lawyer, Ogueju Dike, that the senator, who was the candidate of the All Progressives Congress (APC) in the last governorship election in Imo State, was abroad on medical grounds.

Ukpong said it was impossible for Uzodinma to lawfully travel out of the country without being arrested.

He said having jumped the administrative bail granted him by SPIP, he has since been placed on watch list and would be arrested anytime he attempts to leave the country.

Ukpong then urged the court to order arrest of Uzodinma for deliberately refusing to attend court despite being served with the charge and several hearing notices.

But Ogueju Dike faulted Ukpong’s claim and accused him of unduly portraying his client as a criminal.

He said the case before the court was in relation to allegation of non-declaration of assets. He said the prosecution’s reference to a purported contract was extraneous.

Ogueju Dike said his client was not aware of the charge on time and that he (Uzodinma) was currently outside the country on health ground.

He prayed the court to adjourn the case to a later date to enable his client attend court.

Ogueju Dike undertook to ensure that Uzodinma was in court on the next adjourned date.

Ruling, Justice Okon Abang said he would consider the passionate plea by lawyer to defendant and his undertaking to produce the defendant in court by adjourning the case to a later date for him to attend court.

Justice Abang said the prosecution was at liberty to repeat his application for a bench warrant against the defendant should he fail to attend court at the next adjourned date.

The judge, who noted that no one is above the law, adjourned to April 18 for arraignment.