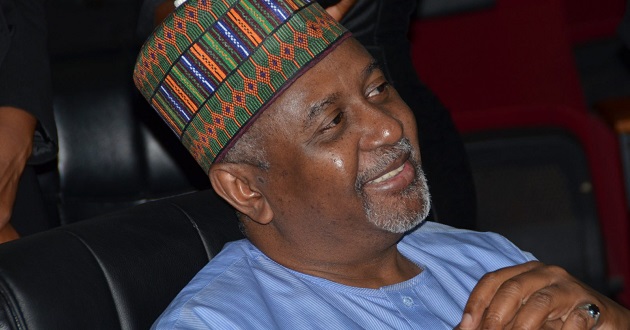 Justice Ahmed Rahmat Mohammed gave the other following Dasuki’s resolve not to appear in court for further proceedings.

This came as Dasuki had last week attacked President Muhammadu Buhari- led Federal Government over his continued detention based on disobedience to various court orders that admitted him on bail.

The former NSA had in a letter he personally signed and addressed to the Registrar of the Federal High Court Abuja, vowed to boycott any proceeding for his trial since Buhari’s government appeared to have resolved not obey any order of the court in his favour.

When his matter came up this Monday, Dasuki kept his vow and was nowhere near the court. Consequently, the trial judge invoked section 352 (4) of the Administration of Criminal Justice Act (ACJA) and issued ordered that Dasuki tried in absentia.

Justice Rahmat Mohammed was one of the judges whose orders granting Dasuki bail were disobeyed by the Federal Government.

Counsel to the Federal Government, Mr. Dipo Opeseyi, as the matter resumed this Monday filed an affidavit dated November 19, 2018 and attached with it a letter of November 12 written to the court by Dasuki that he would no longer attend trial in court in protest over the disobedience to the Federal Government to several court judgment which ordered his release from unlawful detention since December 2015.

In the affidavit deposed by a lawyer, Abimbola Akintola, the Federal Government pleaded for the trial of Dasuki in absentia and in the alternative for the court to compel his presence before the court.

Adopting the affidavit, Opeseyi said it was filed in compliance with the order of the court on April 10, 2018 to the effect that whenever the ex-NSA chooses not to be in court, the prosecution must depose to an affidavit to the effect.

The senior counsel said that with Dasuki’s letter addressed to the Registrar of the court, which was tendered before the court, it is clear that the ex-NSA has made up his mind not to attend the trial in the charges of unlawful possession of firearms brought against him by the Federal Government.

Opeseyi submitted that the grouse of Dasuki was as a result of facts that arose from matters in different courts and as such his grievances ought to have been addressed to the affected courts.

His position was opposed by Dasuki’s lawyer, Victor Okwudili, on the argument that the affidavit evidence was not competent in the eyes of the law to be entertained by the court.

Okwudili called the attention of Justice Rahmat to the effect that the lawyer who deposed to and filed the affidavit, did not affix his seal to the court process as required by Section 10 (Sub 1, 2,3) of the rule of professional conducts for legal practitioners in Nigeria.

After listening to the both counsels, Justice Mohammed in his ruling agreed that the affidavit has no seal of authority, but however said that it was deposed to by a lawyer in the chamber of Opeseyi and that it contained only facts drawn from the letter of Dasuki where he declared not to attend the court again for trial.

Noting that the defendant did not attack any of the facts in the affidavit, the judge said it was the resolution of the court to uphold it, and then ordered that Dasuki be tried in absentia in compliance with 352 of ACJA.

The matter was thereafter adjourned till December 11, 2018.