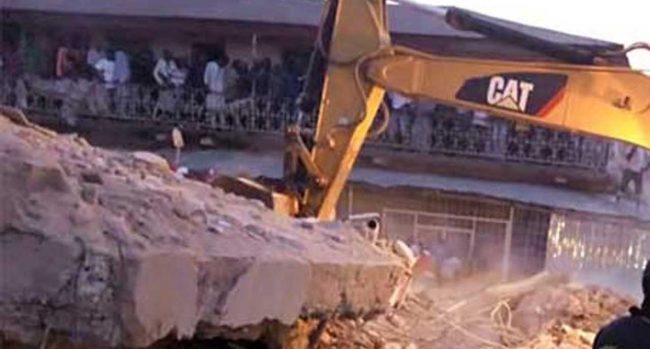 More bodies have been removed from a three storey building that collapsed in Jos on Monday at Delimi community Local Government Area of the state.

Head, Search and Rescue Operations at the North-Central office of NEMA, Mr Nurudeen Musa, made this known to newsmen in Jos on Tuesday.

According to the National Emergency Management Agency, 14 persons were reported dead while four others were severely injured in the building.

The Coordinator, Disaster Management of the Red Cross in Plateau State, Mr Hussaini Zakari, said a total of seven corpses were pulled out during the search-and-rescue operation that lasted till late on Monday while more corpses were recovered when the rescue operation resumed on Tuesday morning.

He added that one other victim trapped in the rubble, who had been communicating with his relatives through his mobile phone was eventually rescued unhurt.

Zakari noted that the injured victims had been rushed to Bingham University Teaching Hospital for further treatment.