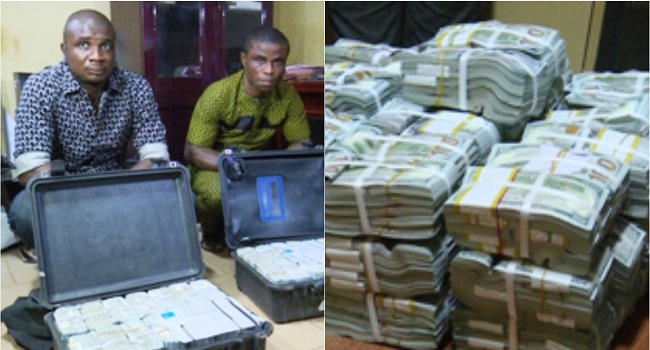 The Economic and Financial Crimes Commission (EFCC) has filed a motion for the interim forfeiture of the $2.8 million it seized from the Akanu Ibiam International Airport last week.

The application made to the Federal High Court Enugu comes despite strong protest by Bankers Warehouse, and Union Bank which have claimed ownership of the huge cash and asked the anti-graft agency to urgently return the money and tender an unreserved apology for the seizure.

But unmoved, EFCC also went ahead and deposed to an affidavit of urgency for the matter to be heard on December 27th 2018, before a vacation Judge sitting in Port Harcourt. It will be recalled that the commission had on Thursday last week intercepted the said money based on intelligence report from two persons: Igoh Augustine and Ezekwe Emmanuel suspected to be money launderers, at Akanu Ibiam International Airport, Enugu.

The agency claimed in a statement that the suspects had confessed during interrogation that they had been in the business of moving cash for “some notable banks”, for over six years and were in the process of doing same for Union Bank Plc, located at New Market, Onitsha, Anambra State, before their arrest. They also claimed to be working for a company known as Bankers Warehouse.

It was gathered that Union bank has not made any physical presence in any of the commission’s offices, including the Enugu office, to establish its claim.

The EFCC Spokesman, Tony Orilade, said on Monday that efforts were being made to secure warrant for the detention of the suspects pending when they would be charged to court. The warrant is consequent upon the refusal of the claimant bank or any of the relatives to come for the release of the suspects.