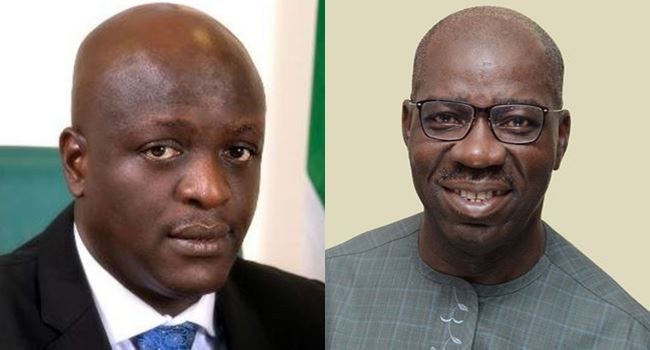 There are strong feelers that one of the major contestants in the June 25 gubernatorial primary of the PDP in Edo State, Omoregie Ogbeide-Ihama, may have agreed to step down for incumbent Governor Godwin Obaseki who switched camp to the country’s main opposition party recently.

Ripples Nigeria gathered that a high level consultative meeting brokered by prominent governors of the party in the South south region to resolve the imbroglio created by the entry of Obaseki into the party may have paid off.

Sources familiar with the development say that far reaching concessions have been made by both parties and that Ogbeide-Ihama has agreed to work with Obaseki to ensure the party wins the forth coming governorship election.

If the brokered deal which reportedly took place in the early hours of Wednesday is sustained, Obaseki will go head-to-head with Osagie Ize-Iyamu, candidate of the All Progressives Congress (APC), in what has been described as a return-match, as both contestants had slugged it out in 2016 with Obaseki coming tops.

Ripples Nigeria had reported how Ogbeide-Ihama had protested the screening of Governor Obaseki by the PDP Edo Governorship Screening Committee at the party’s national secretariat in Abuja last week.

In doing so, he had approached the Port Harcourt division of the Federal High Court where he got an order of the court restraining the PDP from allowing Governor Obaseki from participating in the party’s primary election.

Ogbedie-Ihama had prayed the court to restrain the governor from participating in the exercise based on grounds that he did not purchase the form within the time stated in the party’s time-table.

However, in a counter suit filed before the Edo State High Court sitting in Ekpoma by Felix Iroh, the PDP and the Independent National Electoral Commission (INEC) were restrained from excluding the governor from the primary election.

In his suit, Iroh asked that the governor be allowed to contest the primaries because the PDP granted him a waiver to contest the election on its platform.

In his judgment on Tuesday, Justice J. O. Okeaya said: “I find in my humble view that the applicants have satisfied the guidelines for the grant of the orders sought as enjoined in the celebrated landmark case of Kotoye v CBN (1989), 1 NWLR PT. 98, 419 at 441.

“The applicants sought an Order of Interim Injunction restraining INEC from however refusing to recognize and/or accept the name of any of the aspirants named in paragraph 2 above especially Mr. Godwin Nogheghase Obaseki as lawful aspirants having been lawfully screened and cleared by the 2nd Defendant to participate in the 2nd primary election scheduled to hold on the 25th June 2020 in any report of the monitoring of the said primaries pending the hearing of the Motion On Notice.”