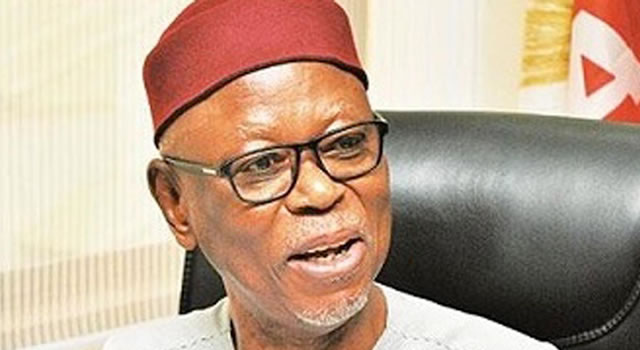 A former National Chairman of the All Progressives Congress (APC), Chief John Odigie-Oyegun has blamed the imposition of candidate at the party’s primary for the defeat of the party at the September 19 governorship election in Edo State.

According to Odigie-Oyegun, who spoke to journalists on Monday in Benin, the state capital, the loss by the party during the election was attributable to the dynamic nature of democracy.

Noting that the electorate voted en masse in line with their conscience, he added that impunity and imposition of candidate at the party’s primaries also contributed to the loss.

Odigie-Oyegun, who is also a former governor of the state however commended President Muhammadu Buhari for not interfering in the process but allowing the people’s will to prevail, while also lauding Oba Ewuare II for his timely intervention at brokering peace between the major actors and stakeholders of the APC and the PDP.

“I was a national chairman and in most cases, we didn’t have court cases after any election because things were done to the letter. If 10 people want to contest for an office, why not give them the opportunity to do so.

“Normally, people come to me; so, they are too many, they will cause divisions within the party. So, let us talk to them so that some will withdraw and I always ask why? If 10 people feel they are capable of discharging the duties of that office, let them contest.

“It is when you start talking to them that problem begins. The ego becomes massive and you start owing them because you persuaded them to step down. You have to find some carrots to drop on the table or else there will be problems. Allowing them to contest is the greatest peacemaking move.”