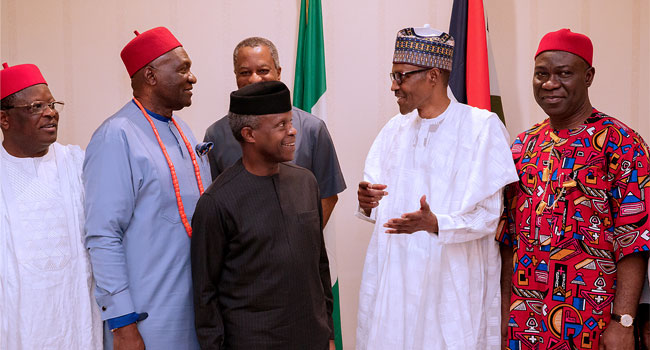 Senate Deputy President, Ike Ekweremadu and governors of the South East this Wednesday had a closed-door meeting with President Muhammadu Buhari at the State House Villa, in Abuja.

Four governors in attendance at the meeting include those of Abia, Anambra, Ebonyi and Enugu states.

Chairman of the South-East Governors Forum and Ebonyi State governor, Chief Dave Umahi, told newsmen after the meeting that major issues they discussed with Buhari at the meeting were the Akanu Ibiam International Airport, Enugu, and the need for the Federal Government to increase mobilisation fee to Julius Berger for speedy work on second Niger Bridge.

“We thanked him for that economic free trade zone. And then we talked about the Enugu international airport, we asked him to deploy the cargo section of the airport, complete the building and extend the runway and also rebuild the runway, because it is very bumpy and the tarmac light is not functioning.

“We also thanked him for the roads and we reminded him that the slow pace of work was attributed to the rains; now that the rains are gone the contractors are complaining of no funding. So we requested that he should do something about the funding,” said.

Secretary to the Government of the Federation, Boss Mustapha, who also spoke to newsmen after the meeting the visit was remarkable and had corrected the impression that the Federal Government was not doing anything for the people of the zone.

“We received a very high-powered delegation today (yesterday) and I think it is a remarkable visit because they came essentially to thank Mr. President over the major activities that have taken place in the South-East,” he said.

When asked if President Muhammadu Buhari used the opportunity to solicit for the votes of the people, Mustapha said:

“This obviously might not be the most appropriate time.

“You remember there was a programme in the South-East where Mr. President asked me to represent him and I threw the kite by telling the south-eastern states that their quickest and easiest means to the presidency is to support President Muhammadu Buhari’s second term.

“Meaning that they can short circuit the period in terms of only having him there for another four years and whatever they do in 2019 will determine what will happen thereafter, because politics is a game of numbers and it is like a cooperative society.”