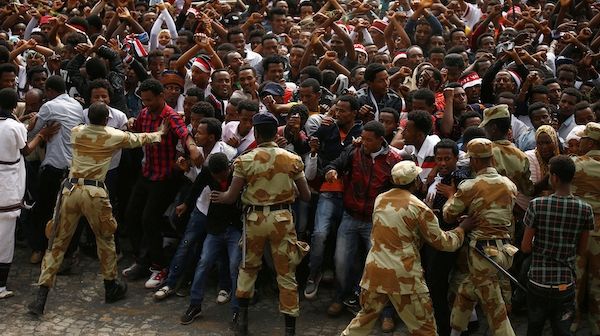 A call for calm earlier made by popular activist, Jawar Mohammed, following violent protests that erupted in Ethiopia against Nobel peace laureate and Prime Minister, Abiy Ahmed, has been ignored, with fresh clashes recorded in the Oromia region of the country.

Local authorities say 11 more people were killed after fresh unrest was sparked on Friday between security forces and scores of demonstrators raising the death toll from 16 to 27.

This is close to double the number of deaths that had earlier been reported.

The unrest began on Wednesday, when protests broke out after the prominent activist and journalist Jawar Mohamed said the government was trying to remove his bodyguards.

The demonstrations have reportedly witnessed the closure of major roads in cities across Oromia, including those linking the region to Addis Ababa.

This week’s violence in Oromia is a deeply worrying reminder of just how volatile the country is with fresh general elections due for next year.

5 dead from Lassa Fever break out in Benue