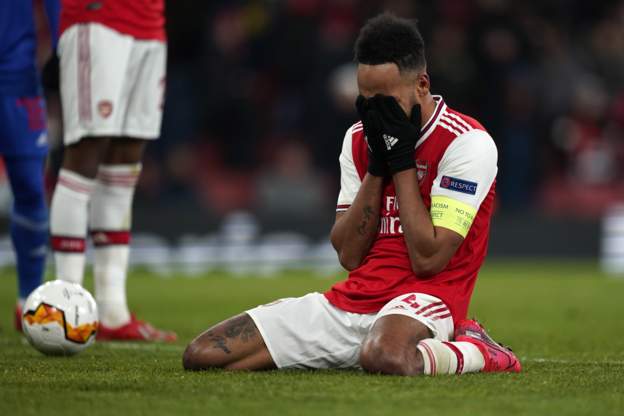 Arsenal failed crashed out of the Europa League after falling to a 2-1 defeat at home to Olympiakos in the second leg of their round of 32 tie on Thursday night.

Leading the tie after a 1-0 victory away, Arsenal started trailing at home 53rd minute when Pape Abou Cisse leveled both sides on aggregate, which forced the game to extra time

The Gunners scored first and thought they were heading to the round of 16 as Pierre-Emerick Aubameyang put them ahead in the 113th minute.

But a stunning Youssef El Arabi winner sealed the win for the Greek club, who held on to their lead to advance on away goal rule.

Aubameyang could have turned the entire story around in the final miute, but missed a clear chance with the very last kick of the game.

Mikel Arteta’s side were condemned to their first defeat of 2020, and also denied further participation in continental football this season.