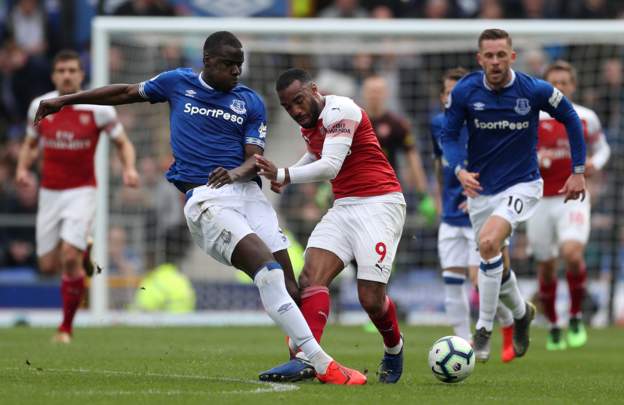 Super Eagles forward, Alex Iwobi featured as a substitute for Arsenal who missed a chance to go third in the Premier League on Sunday.

22-year-old Iwobi, who has made 39 appearances for his team this season, was brought on in the 74th minute for Mesut Ozil as they searched for an equaliser.

The game played at the Goodison Park saw hosts Everton claim all three points from a 1-0 victory over the Gunners.

The hero of the game, Phil Jagielka, was a late call up to the starting squad for Everton, replacing Michael Keane, who pulled out due to illness.

Jagielka started and scored the only game of the encounter in the 10th minute.

At 36 years and 233 days, Phil Jagielka is the oldest player to score in the Premier League this season

Victory for the Toffees means they leapfrog Watford into ninth while Arsenal remain in fourth.

The Unai Emery side will host Napoli of Italy next in the quarter-finals of the Europa League at the Emirates Stadium on Thursday.