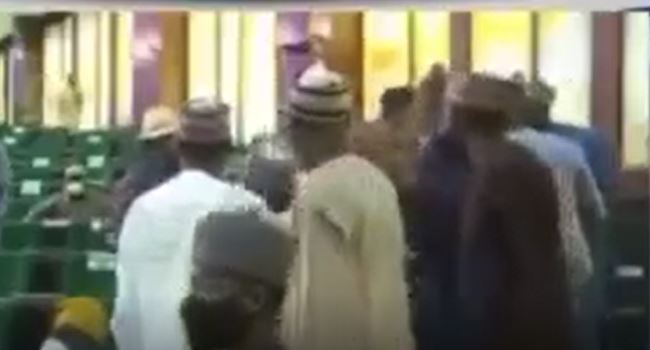 Viral video claims Nigerian Senate is calling for division of the country.

False. The scene in the video in reference took place within the chambers of the House of Representatives during the passage of the Electoral Amendment Bill. The call for division mentioned in the video was not for the division of the country, but rather a terminology used in the house in the process of revisiting an issue earlier decided upon.

Lately, a viral video on whatsapp shows a rowdy session of the green chambers of the National Assembly arguing on division. The video started with a voiceover claiming that Nigeria’s division is no longer being demanded by miscreants on the streets, but also in the Senate.

On the same day, the lower chamber, also known as the green chambers of the National Assembly, the House of Representatives also moved through the amendment of the electronic transmission of electoral results where the deputy speaker who doubled as the chairman for the session ruled against the amendment and the house went rowdy.

Read also: FACT CHECK: Does ‘Ewedu’ (Jute) have the potential to cure cancer?

The session was adjourned to the next day in order to take recommendations from the National Communications Commission before taking a final stance on electronic transmission.

What’s a division?A division of the house is a means of taking a vote that physically counts members voting.

Several house members were suggesting that for a matter that has been decided on and the gavel has been hit, the order of the house laid process call for taking a division, but no one made a motion for that point.

This was the stand pointed out by the deputy speaker of the House of Representatives, Ahmed Idris Wase that no one made a motion for division on the previous day of debate.

Also, the voice over in the viral video claimed that the motion was moved at the Senate. The Senate went through physical counting, also known as division to amend the electoral act but the video was referring to the House of Representatives and not senate.

Also, Ripples Nigeria checked the Policy and Legal Advocacy centre database to track bills in the National Assembly to confirm if there were bills for the division of Nigeria, but none were found.

FACT CHECK: Did HollyFrontier get a better deal with Sinclair than NNPC got with Dangote refinery? ﻿

FACT CHECK: Does ‘Ewedu’ (Jute) have the potential to cure cancer?