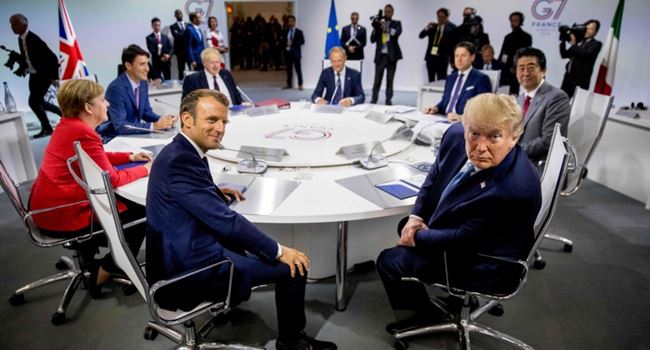 Controversial US President Donald Trump has been at rift with a number of Western leaders at the ongoing G7 Summit taking place in France over certain matters.

Before the start of the G7 Summit on Sunday, Trump took to Twitter insisting that he was getting along well with other Western leaders.

“Before I arrived in France, the Fake and Disgusting News was saying that relations with the 6 others countries in the G-7 are very tense, and that the two days of meetings will be a disaster,” Trump wrote on Twitter shortly before meeting new British Prime Minister Boris Johnson.

“Well, we are having very good meetings, the Leaders are getting along very well, and our Country, economically, is doing great – the talk of the world!”

However it turned out not to be the case as rifts quickly emerged during the Summit with his Western allies on issues ranging from his trade war with China to Iran, North Korea and Russia.

Reports say tensions were quickly on show, however, as the first full day of talks between the leaders of Britain, Canada, France, Germany, Italy, Japan and the United States got underway in the Basque coast resort of Biarritz in southwest France

UK PM was first to voice concern about creeping protectionism and said those who support tariffs “are at risk of incurring the blame for the downturn in the global economy”. Sitting across from Trump on Sunday, he said: “We’re in favor of trade peace on the whole, and dialing it down if we can.”

The G7 gathering is taking place against a backdrop of worries about a global economic downturn and coincides with an era of international disunity across an array of matters.