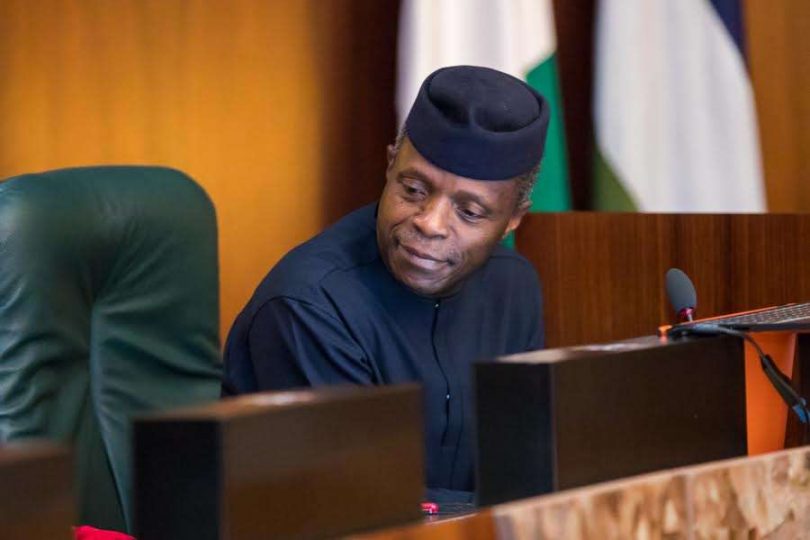 Vice President Yemi Osinbajo has disclosed that American firm, General Electric (GE) is set to invest $2 billion on the Lagos-Kano rail line project, as part of efforts to boost local and international trade along Nigeria’s northern and southern zones.

Osinbajo, who spoke Wednesday at the opening of the inaugural edition of the Lagos-Kano Economic and Investment Summit in Lagos, said the proposal by GE, under a concession from the Nigerian government, aims to enhance the movement of cargo from Apapa ports to Kano via the rail line.

“I believe that Lagos and Kano states have by this collaboration underscored the cornerstone of the federal government’s economic recovery and growth plan, namely the leveraging of synergies among states and between government and the private sector,” said Mr. Osinbajo, a Law Professor.

“The strategic role of the federal government is of course to create an enabling environment for commerce, beginning with the provision of infrastructure.

“For us, what this meant especially in the context of Lagos and Kano collaboration is the refurbishing of the narrow gauge Lagos to Kano Rail with a concession to General Electric who are proposing to invest almost $2 billion to ensure that the rail route is effective for movement of cargo from Apapa port to Kano.

“Similarly, we are investing in the Lagos to Kano standard gauge line, the Lagos-Ibadan portion of that is expected to be ready by the end of this year.

“Also, we have budgeted N80 billion for the development of special economic zones in the six geo-political zones of the country.”

Osinbajo also said arrangements had been made to establish independent power projects to specifically service printers in Somolu area and traders in Sura Market in Lagos.

He said the Federal Government would note the decisions reached at the summit and would use them to direct its engagement with state governments going forward.

“Let me again commend Governors Ganduje and Ambode for this summit,” the vice president continued.

“I want to commend Governor Ganduje for making the long journey to Lagos. I must also say that Governor Ambode deserves special mention for his foresightedness in establishing this collaboration, working with Governor Atiku Bagudu of Kebbi on the famous LAKE Rice and even leasing land from Ogun State to grow rice which I think is another act of collaboration.”

In his address, Governor Akinwunmi Ambode said the decision of the Lagos state Government to join the Oodua Investment Group triggered what has evolved over the last two years to become a symbol for effective partnerships between Lagos and other states.

He said with the current economic challenges facing the nation, there was no better time for states to begin to look beyond an oil-driven economy and take advantage of their comparative advantages to engender economic growth.

“We urge other states and regions to begin to leverage on their respective areas of comparative advantage by establishing partnerships towards establishing an inter-state or inter-regional commodity value chain,” the Lagos governor said.

“The idea of an intra and inter-regional trade and cooperation is not new to Lagos State. Over the past years, our State has collaborated with Kebbi and other states from within the western region to drive economic growth and development.”

The Lagos governor said the immediate aim of the strategic partnership with Kano is to produce about 80 per cent of Nigeria’s agro-allied inputs such as wheat, groundnut, onions, maize, millet, sorghum, sugar cane and beef, adding that a Memorandum of Understanding would be signed by both states at the end of the summit to demonstrate commitment to the sustainability of the partnership.

Also speaking, Kano State Governor Abdullahi Ganduje said his administration entered into the partnership with Lagos with a strong belief that it would create a veritable platform to drive home- grown investments in the face of volatile global oil prices.

“We need to redefine our investment climate and find alternative sources of financing critical sectors and projects as well as improve public service delivery,” he said.

On his part, president of Dangote Group, Aliko Dangote, commended the partnership between both states, just as he said Lagos had clearly demonstrated its readiness for serious investments.

“Lagos is more than ready for business. Our refinery, petrochemical, fertilizer and gas projects will generate N8 trillion per annum for Nigeria when fully on stream,” he said.