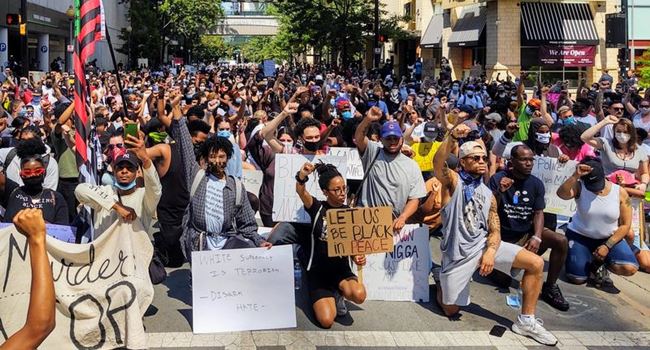 Wild protests have continued across the United States of America over the death of George Floyd, an unarmed Black man, who was killed by Minneapolis police officer, Derek Chauvin.

Demonstrators in Minneapolis, Minnesota, who remain undeterred by curfews and National Guard, have continued to demand all officers involved in Floyd’s death be charged.

An hour before the 11pm (03:00 GMT) curfew in Washington, DC on Sunday night, police fired a major barrage of tear gas and stun grenades into the crowd of more than 1,000 people.

Minnesota’s state Attorney General Keith Ellison said on Sunday he will lead the prosecution of the case involving the killing of George Floyd.

“It is with a large degree of humility and a great seriousness, I accept for my office the responsibility for leadership on this critical case involving the killing of George Floyd,” Ellison said in a tweet.

“We are going to bring to bear all the resources necessary to achieve justice in this case.”

This came after, Kellie Chauvin, the wife of fired Minneapolis police officer, Derek Chauvin who has been charged with third-degree murder and manslaughter in the death of George Floyd, filed for divorce.

According to her lawyer, Kellie Chauvin was distraught over Floyd’s death.