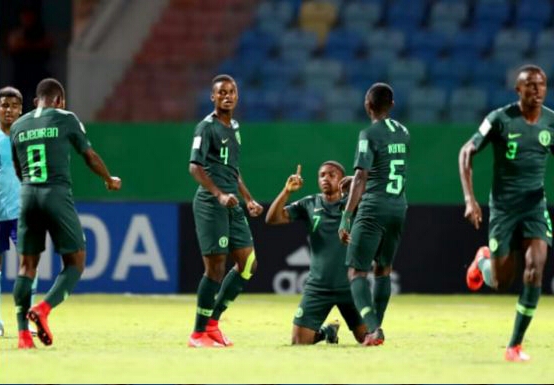 Nigeria’s dreams of lifting a sixth FIFA U-17 World Cup in Brazil have crashed early Wednesday (Nigeria time) with a 3-1 defeat to Netherlands.

The Golden Eaglets, who finished top of their group, were stunned by a Dutch team that advanced to the second round as one of the four best third-placed teams

The encounter encounter at the Estadio Olimpico, Goiania saw Dutch forward Sontje Hansen score a hat-trick while Olakunle Olusegun got Nigeria’s only goal of the game.

Hansen opened scoring in the fourth minute after he was played through on goal by Jayden Braaf.

The lead lasted only eight minutes before Olusegun equalised for the Golden Eaglets following a superb pass from Akinkunmi Amoo.

The Netherlands however regained the lead in the 15th minute with another fine effort by Jansen.

Nigeria struggled afterward, then conceded a penalty 12 minutes from time when Ferdinand Ikenna handled the ball inside the box, as Hansen stepped up to get his third of the night despite Daniel Jinadu diving to the right direction.