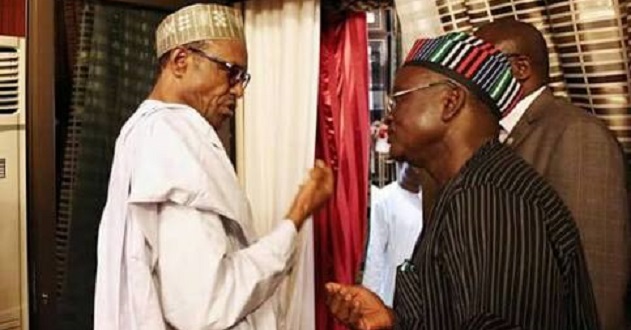 The Benue State governor, Samuel Ortom has called on the Economic and Financial Crimes Commission (EFCC) to probe President Muhammadu Buhari’s use of security votes.

Ortom state’s this on Wednesday in reaction to reports that the anti-graft agency was carrying out an investigation into how he spent the security vote for Benue State since he became governor.
According to him, it is unheard of that security votes would come under investigation, adding, that the EFCC needs to start the investigations from President Buhari.

“How can you single me out of 36 (governors) for investigation? It (security vote) is not something that any government will begin to disclose. Why should Benue’s case be different if not persecution? If the EFCC wanted a genuine investigation of security vote spending, they should have started from the Presidency and across the 36 states.

“If their focus was on Benue State, they should have started from 1999. But this is not the case. With the enormous security challenges in the state since my assumption of office, it is surprising that any one would expect me to do nothing but keep the security vote in the safe.”

The governor continued, “The security vote spending being investigated spans from 2015 to 2018, a period of grave security challenges in the state. I reiterate that the investigation is a clear case of persecution. I have not misappropriated, diverted or stolen any money. I have nothing to hide. I assure that the investigators can find nothing incriminating against me.”

Speaking further, he explained that the impeachment move against him was illegal, and that it was a plot to destabilise the state.

He claimed that the plan was to unleash Fulani militia on the state, adding, that strange herdsmen and 10,000 cows had already invaded Guma (his country home) and local government area.

“Having failed to achieve their anti-Benue objectives, the next phase is the unleashing of Fulani militia. I have been told that after the Operation Whirl Stroke succeeded in chasing away the herdsmen, they have started moving into Guma again as of yesterday. I have already informed the Commander of OPWS and I hope security agencies will take up the matter

“I believe Mr President is not aware of happenings in the state but I expect him to caution the Inspector-General of Police and the Director General of DSS”, he said.