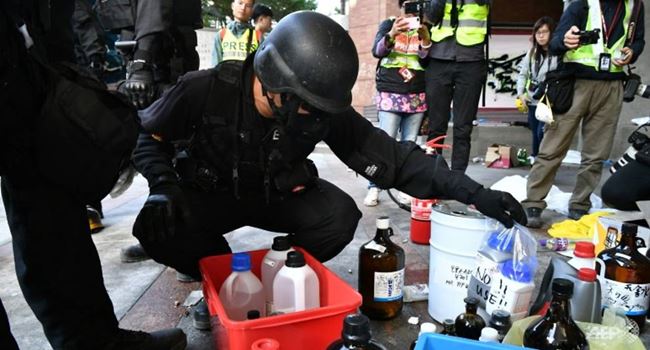 The police authorities in Hong Kong have confirmed the discovery of no fewer than 4,000 petrol bombs during a two day search while clearing the Polytechnic University campus which was the site of a fiery stand-off between activists and police.

During the stand-off on Wednesday, the protesters later left the scene as the officers moved into the campus on a search where they found 3,989 petrol bombs; 1,339 explosive items; 601 bottles of corrosive liquids; and 573 weapons.

After the search, Hong Kong police issued a statement on Friday announcing that the campus had been handed back to the university management after the search for explosives were over.

Reports say the protesters had earlier barricaded themselves inside the campus two weeks ago forcing the authorities to seal off the university grounds, trapping more than 1,000 protesters inside at one point.

Elvis, a 19-year-old student, spent five days inside PolyU during the siege.

“Chairs and tables were all taken out to create barricades so everyone was sleeping on the ground but it was comfortable because we were so tired,” he told the the BBC.

“Many people were caught. We tried to escape three times but kept failing because the police kept firing teargas and rubber bullets at us. I don’t think they wanted us to leave. It was a nightmare. There was blood everywhere.”

The protesters cooked for themselves with supplies provided by members of the press or medical team.

“Most of the water tasted like teargas. That’s why we had to drink bottled waters. On the fourth day, there were no fresh water bottles left, so we drank water from bottles left behind.”

Some protesters were able to escape by climbing down ropes from a road bridge, but Elvis said it was too dangerous and he didn’t want to leave others behind especially after he injured his leg in one attempt.