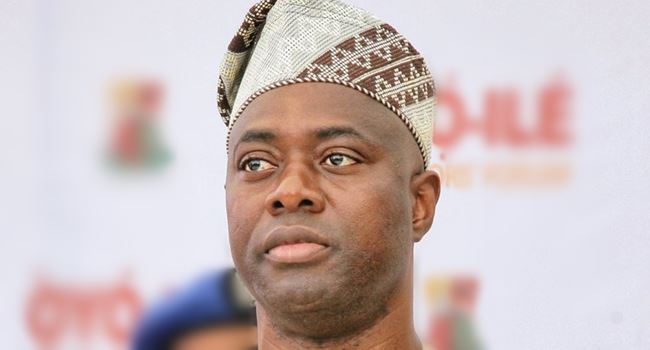 Oyo State chapter of the Peoples Democratic Party (PDP) has backed the decision of the state government to sack the Association of Local Government of Nigeria (ALGON) members in the state.

ALGON opposing the move had through its Chairman, Ayodeji Abass-Aleshiloye, warned the state Governor, Seyi Makinde against any attempt to appoint caretaker chairmen and administrators in the 33 Local Government Areas and 35 Local Council Development Areas (LCDAs) in the state.

Responding, the Publicity Secretary of the PDP, Akeem Olatunji, said they were mere noisemakers who wanted to keep benefiting from illegal conducts.

Olatunji maintained that the ALGON members who were raising issues about Mankinde’s proposed composition of the Local Governments leadership were swimming against the tide of public opinion in the state.

PDP asked the Governor Makinde to ignore the latest rants of the sacked council chairmen on the planned appointment, saying that it was another tactic to hold the people of the State to ransom by crippling governance at the grassroots.

READ ALSO: ‘When a servant steals the garment of his master…he will misbehave’, Adeyemi asks Nigerians to forgive Melaye

The party maintained that the former chairman’s rant was medicine after death, because the circumstances that led to their sack were different from what they portray to the unsuspecting public, as they got into office through illegality and wanton disobedience to court order and that their election or more or less undemocratic coronation could not stand.

“Ever since the illegal chairmen were caught up in the web of the law, Mr Abass Alesinloye and his co-travelers have become jobless irritants, acting like rambunctious children and looking for every opportunity to seek relevance, which has long left them following the exit of their party from government.

“While we consider it pedestrian and unsound for Alesinloye to take jibes at Governor Makinde, a man who has been above boards in his dealing and is becoming renowned as Mr Due Process and Mr Rule of Law, going by his unpartisan approach to the governance of Oyo State, we are quick to concede that expecting decorum from the APC will be asking for too much, as no one can give what he does not have.

“For the information of Alesinloye, who we suspect has been on a lone voyage of irresponsibility and noisemaking, as other sacked chairmen with means of livelihood have since returned to their jobs, the people of Oyo State have been the ones yearning for government structure at the grassroots, with the latest testament to this being the shouts of “choose caretaker chairmen for local governments” at the House of Assembly chambers last Tuesday, when Governor Makinde was presenting the 2020 budget.

“Therefore, the people of the state are solidly behind Governor Makinde and we are sure that if Alesinloye and his party can embark on a survey, they will see that the government would be lifting a heavy burden from the necks of the people if, indeed, it goes ahead with the appointment of interim management committees at the local government pending election into the councils next year.

“For the avoidance of any doubt, Governor Makinde did not offend any section the Nigerian Constitution as far as issues of the sacked former local government leadership are concerned in the state and he would not be offending any if he, indeed, appoints replacement for the sacked chairmen, who have since turned themselves into busybodies. The same is also true about his handling of the Oyo State Independent Electoral Commission (OYSIEC), the Governor has not flouted any rule and this applies to everything that has to do with governance in the state in the last six months.

“As far as we are concerned, the Makinde government is well-rested on the pillars of democratic norms and ethos, as well as popular votes of the people and will not do anything to trample on the constitution like the immediate past government of the APC, which foisted the illegality that the sacked chairmen represent.

“We wish to recall that the so-called ALGON for which Alesinloye has been speaking was a beneficiary of an election that was basically an affront on the 1999 Constitution of the Federal Republic of Nigeria (as amended). Whereas, the Constitution recognised only 33 local governments in Oyo State, the illegal election that brought in the jesters being led by Alesinloye was conducted into 68 Local Governments and Local Council Development Authorities (LCDAs), something that is unknown to the Constitution.

“What was expected of any administration that adheres to the Rule of Law is to conduct elections into only constitutionally- recognised councils, while keeping the LCDAs for administrative convenience only. But since the immediate past government could not allow itself to be guided by the Constitution, no right-thinking government will allow the continuous perpetuation of illegal acts by allowing a set of people who took office through unconstitutional means to continue to keep that office.

“As it is widely believed, evil thrives only where the good people refuse to take action. By participating in an election that was banned by the courts, the said ALGON members cannot expect to remain in office if the right things must be done. As far as we are concerned, the matter between ALGON and the government of Oyo State is before the court of competent jurisdiction. They should await the verdict of the court in that regard or are they afraid of their shadows?”