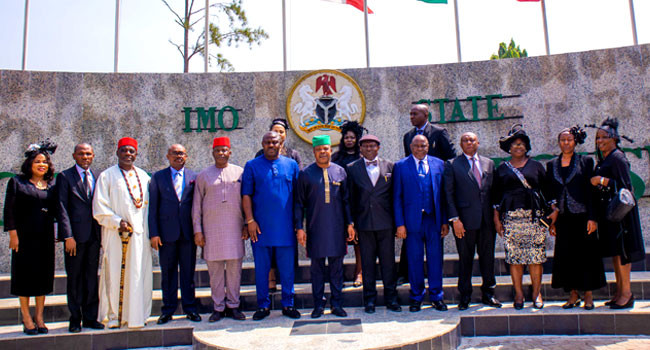 Imo State Governor, Emeka Ihedioha on Friday inaugurated nine judges in the state and charged them to ensure fairness, as well as make sure they deliver justice to all manner of people without fear or favour.

The judges, who were recommended for appointment by the National Judicial Council (NJC), were sworn in at the Sam Mbakwe Expanded Executive Council Chambers of the Government House in Owerri, the state capital.

The nine inaugurated judges included seven judges of the State High Court and two others who will serve as Customary Court of Appeal judges.

Speaking at the event, Ihedioha harped on the need for the three arms of government to collaborate, saying that such an atmosphere would help good governance to thrive.

A statement by the governor’s Chief Press Secretary, Chibuike Onyeukwu quoted him as assuring that his administration would always uphold the independence of the judiciary and abide by the rule of law.

The governor said his administration has kept a symbiotic relationship with other arms of government.

On how he plans to enhance the status of the judicial system in the state, he said, “We have reconstituted the Judicial Service Commission; renovation of Judges’ Quarters has begun.

“We have also ensured the payment of salaries of judges as at when due and provided official guards for them. This administration achieved these feats within a short period of time, despite our financial constraints.”

He promised the governor that the judiciary arm of government would continue to serve justice to all.

Also speaking on behalf of the newly inaugurated judges, Justice Ihuoma Chukwunyere told the governor that they would abide by the law at all times.