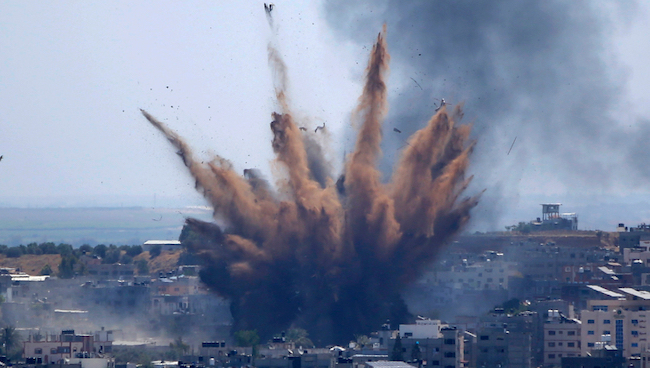 At least 42 Palestinians including 10 children were killed in airstrikes by Israeli forces on Sunday in Gaza.

Medical personnel in the area confirmed to journalists on Sunday night.

However, the Israeli military has defended its action, saying the act was unintentional as jets attacked a tunnel system used by militants, which collapsed and brought down the homes.

The Israeli Prime Minister, Benjamin Netanyahu, who had earlier met with members of the United Nations Security Council, said his country’s campaign in Gaza was continuing at “full force.”

READ A,O: Why abducted Greenfield varsity students are still with bandits – Gumi
He added that the destruction of a 12-storey building housing the Associated Press and the Al Jazeera TV network was necessary since it allegedly accommodated a militant group’s intelligence office.

“We are acting now, (and) for as long as necessary, to restore calm and quiet to you, Israel’s citizens. It will take time,” Netanyahu said in a televised address after meeting with his security cabinet on Sunday.

The Palestinian Health Ministry said the death toll in Gaza had increased to 192, including 58 children amid an intensive Israeli air and artillery barrage since the fighting erupted last Monday.

The Israeli authorities claimed 10 people including two children had been killed in Jerusalem.

The UN Secretary-General, Antonio Guterres, told the Security Council that hostilities in Israel and Gaza were “utterly appalling” and called for an immediate end to fighting.

He said the UN was “actively engaging all sides toward an immediate ceasefire” and urged them “to allow mediation efforts to intensify and succeed.”

The United States told the Security Council it has made clear to Israel, the Palestinians, and others that it is ready to offer support should the parties seek a ceasefire.”

Related Topics:#featuredGazaIsraeli airstrikes
Up Next