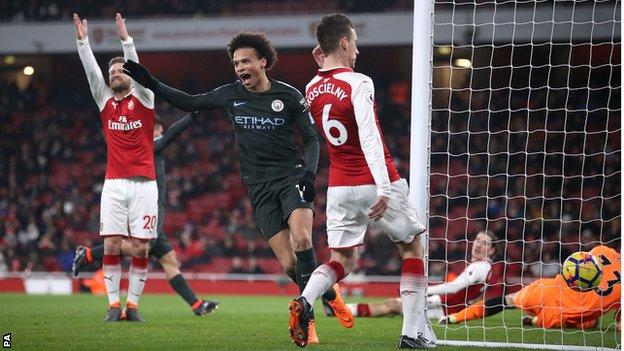 Super Eagles forward, Alex Iwobi was an unused substitute for Arsenal as Manchester City thumped them a second time in five days in a Premier League clash on Thursday night.

After beating the Gunners 3-0 in the Carabao Cup final last Sunday to lift their first of three possible trophies this season, City put up another dominant performance at the Emirates Stadium.

It was Bernardo Silva who opened the scoring when he curled in a left-footed strike into the far corner in the 15th minute.

David Silva doubled the lead by finishing off a fine team move in the 28th minute, before Leroy Sane added a third for the visitors five minutes later.

Read also: Joshua does not have confidence to fight me —Wilder

Arsenal had the opportunity of pulling one back shortly after the break, but Ederson saved Pierre-Emerick Aubameyang’s penalty.

With the win, City extend their lead at the summit of the table to 16 points– above second-placed Manchester United.

The match marked manager Pep Guardiola’s 100th game at the Etihad club, as well as a 30th win for City this season.

Meanwhile, Arsenal, who have now lost 9 times this season, stay sixth on the table, 10 points off the top four.

Wenger blames ‘lack of confidence’ for Arsenal’s defeat to City

Joshua does not have confidence to fight me —Wilder