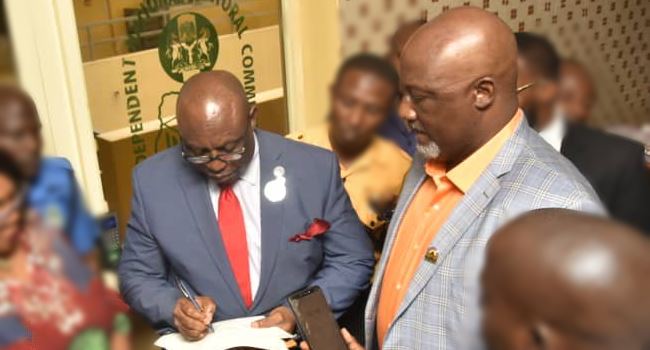 He made the call on Wednesday, when he stormed INEC office in Abuja, with 21 video clips documenting alleged electoral irregularities during the election.

Melaye who made this known in a post on his Twitter handle, @dino_melaye, said he was received by INEC secretary, Rose Orianran-Anthony and the national commissioner Festus Okoye.

The last Saturday election, which held along the governorship election in the state, was reportedly marred by violence, killings and other electoral irregularities.

While the governorship election was concluded and INEC declared Governor Yahaya Bello the winner, the senatorial election was declared inconclusive by the electoral body.

However, Melaye of the Peoples Democratic Party (PDP), is trailing Smart Adeyemi of the All Progressives Congress (APC) in results already announced.

While receiving the petition on behalf of INEC Chairman, Professor Mahmood Yakubu, Okoye said the commission would look into the petition and take necessary actions.

Melaye told journalists that his determination to retrieve what he described as the stolen mandate “is a battle of no retreat, no surrender.”

His petition dated November 18 2019, with the title “A call for cancellation of the Election for Kogi West Senatorial District held on November 16 2019 in certain areas”, was filed by his lawyer, Tobechukwu Nweke.

The petition reads in part: “In conclusion, sequel to the abovementioned spread violence, gunshots and killings, disruption of the election, snatching of ballots, multiple thumb printing, several electoral malpractices, irregularities and total sabotage of the electoral process cut across all the seven Local Government Areas in Kogi State which were demonstrated in the video footages attached herein, and the facts in paragraphs 1-5 above which reveals that the election was not conducted in Kogi State Senatorial District, in substantial compliance with the dictates of the Electoral Act, 2010 (as amended) as well as the requisite Guidelines and Regulations issued for the election we urge the commission to cancel the entire election to the Senate of Kogi West Senatorial District held on November 16 2019.”

BUHARI TO JONATHAN: Your legacy of humility will continue to echo