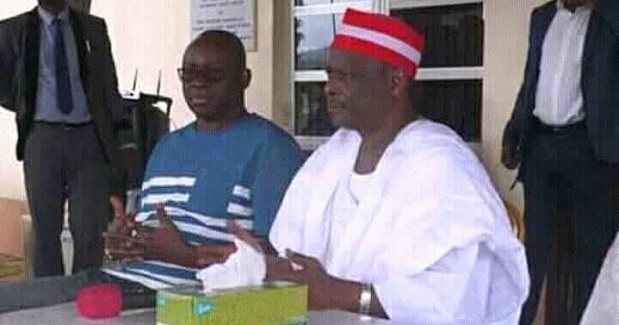 Kwankwaso visited Fayose at the state Government House in Ado Ekiti, where they engaged in a secret meeting, as details of the meeting were not made public.

The meeting came two days after the former Kano State governor shunned the APC national convention in Abuja on Saturday to visit a presidential aspirant for the forthcoming 2019 general elections under the platform of the opposition PDP, former Vice President Atiku Abubakar.

After the meeting with Fayose on Monday, the two politicians were said to have called for the credible and peaceful conduct of the July 14 governorship election in Ekiti State.

The Ekiti State governor’s Chief Press Secretary, Idowu Adelusi, in a statement in respect to the meeting said that Kwankwaso addressed the northern community residents in the state after talks with Fayose.

The statement noted that the former governor urged the northerners in the state to ensure they live in peace with their hosts and exercise their civic duties during the election, adding that elections should not be seen as a war, but that the votes of the people must count.

Idowu said, “Kwankwaso also decried the spate of killings in some parts of the country, noting that it was the responsibility of the government to secure the lives and property of the citizens.”

The APC senator, who came behind President Muhammadu Buhari at the APC presidential primaries for 2015 presidential election, also commented on his plans to dump the ruling party.

Responding to a question on whether he plans to join PDP, he had said that doing such will depend upon the collective agreement of members of the new PDP (nPDP) bloc in APC.

Buhari’s face-off with NASS over 2018 Budget, who should Nigerians believe?

EKITI 2018: Fayemi’s candidacy under threat as Oni challenges his victory in court