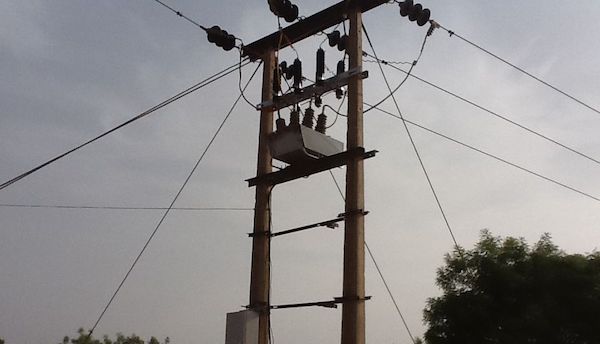 A middle-aged man was on Tuesday electrocuted in Abakaliki area of Ebonyi.

The incident occurred along the Abakaliki/Enugu highway at about 12:00noon on Tuesday.

An eyewitness told journalists the victim was a labourer digging a channel for a mobile telecommunication cable when the incident occurred.

He said the deceased, whose identity has not been ascertained, climbed a tree to cut some leaves to cover his water container from heat, but the cutlass he used came in contact with the tree branches lying on a high-tension cable.

He said: “The man is one of the daily paid labourers engaged by one of the mobile telecommunication companies laying underground cable in Abakaliki.

“He climbed the tree to cut some of its leaves to cover his container of water, but unknown to him some of the branches were touching the high-tension wire close to the tree.

“The man was electrocuted. His corpse has been deposited at a hospital mortuary.”

The spokesperson of the state police command, Mrs. Loveth Odah, confirmed the incident.

She, however, said her office has not been officially briefed on the incident.

“I got a phone call on this ugly incident, but before I could get there, the road safety officials had evacuated the corpse and deposited it at the mortuary.

“For now, my office is yet to be officially briefed on the matter. It is a very sad and unfortunate incident,” Odah said.