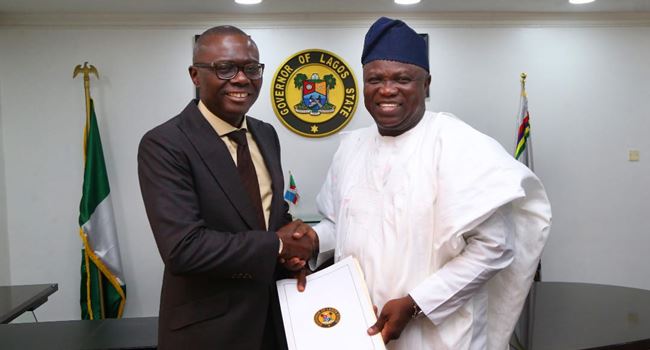 The handing over which took place on Tuesday at a private place in Alausa, Ikeja, Lagos, was confirmed by the incoming governor while fielding questions from the pressmen.

The incoming deputy governor, Obafemi Hamzat, was also involved in the private ceremony.

Answering questions from the governor’s press crew after the brief ceremony, Sanwo-Olu said: “We had very private handling over ceremony with the governor of the state, Akinwunmi Ambode, and we are happy with what he told us.

“We are excited about the conversation and thought we had with him. We are looking forward to the inauguration ceremony tomorrow.

“I am using this opportunity to invite you all to the event. We need the media to be part of the journey we are about to embark upon tomorrow. We need you to be part of the conversation centred on taking Lagos to a greater height. And from the inception, we want you all to be part of that story. After the inauguration, the governance of the state starts immediately.”

According to him, the conversation with the governor was centred on more advice and how his thoughts were and what “we should also be concerned with. And whatever he has to offer. What we needed to work with our documents. And we have the right documents to work with and we will take it up from there”.

Meanwhile, addressing the press crew, Head of Service, HOS, Mr. Hansen Muri-Okunola, who accompanied Sanwo-Olu said: “Behind closed door a few minutes ago, the governor did a private handover ceremony in his office to the governor-elect.

“A few of our policies might have been unpopular but these were decisions taken with the best interest of our State in mind. With the benefit of hindsight, maybe we could have done some things differently but our intention was always clear, for the good of Lagos,” he said.