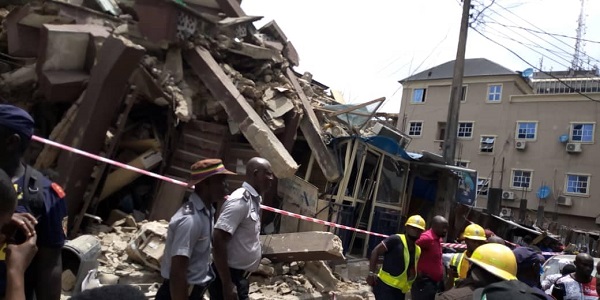 Following the collapse of yet another building which had been marked for demolition, the Lagos State Commissioner for Physical Planning and Urban Development, Rotimi Ogunleye, has called on occupants of marked buildings across the state to vacate them to avoid loss of lives.

A three-storey building on Kakawa Street, Lagos Island collapsed on Monday. Luckily, no one was trapped in it as occupants had vacated before its collapse.

The commissioner therefore urged all occupants of marked buildings to vacate them pending the arrival of the demolition team of Lagos State Building Control Agency (LASBCA).

Ogunleye said that relief materials and resettlement centres had been provided to accommodate those who would be affected.

“The building in question has been identified as distressed by the officers of the Lagos State Building Control Agency (LABSCA) and all the necessary statutory notices had been duly served.

“It was one of the defective structures marked for removal by the agency. “Fortunately, occupants had been evacuated before the incident occurred,” he said.

The commissioner also said the Lagos State Rescue Team and LASBCA was alerted to move to site promptly to check all adjoining buildings so as to evacuate the occupants to avoid any further hazards.

Ogunleye disclosed that no fewer than 25 buildings had been removed by the state agency.

He stated that government had stepped up measures to rid the state of distressed buildings to prevent loss of lives and properties.