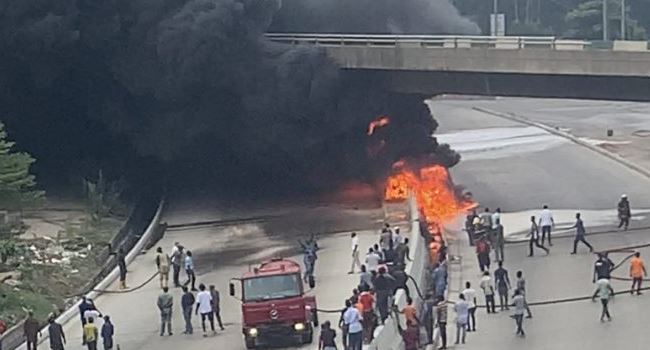 The Lagos State Government on Sunday, announced the closure of the Airport Bridge at Toyota Bus Stop on the Oshodi-Apapa Expressway.

It was learnt that the closure of the bridge is as regards the incident that occurred last Thursday on the highway, which resulted to an explosion, after a tanker collided with another truck and significantly affected the structure of the Airport Bridge.

This disclosure was made known in a statement, personally signed by the Commissioner for Transportation, Dr Frederic Oladeinde, on Sunday.

According to him, “The bridge, therefore, has to be temporarily closed to vehicular traffic movement to enable the state government conduct structural tests on the bridge.”

He further announced alternative routes to be used by motorists, during the test and reopening of the bridge, so as to avoid traffic, adding that the Lagos State Traffic Management Officials (LASTMA) will be deployed to the corridors to control and manage traffic flow along the axis during the course of the diversions.

He stated: “Motorists from Mile 2 to Cele on Apapa-Oshodi Expressway approaching Iyana-Isolo through Daleko Bridge will need to make use of Aiye and Osolo Way to Asa Afariogun through 7&8 to access International Airport Road.

“Motorists from Toyota will make use of the service lanes by Armed Forces Resettlement Centre to BOC Gases on old NAFDAC headquarters, through a U-turn at Cappa on Agege Motor Road to Bolade/Oyetayo Street (Oshodi-Isolo Local Govt Secretariat) through Bolade on Apapa-Oshodi Expressway via Charity in order to reach International Airport Road.

“The government is assuring the motoring public that the Airport Bridge shall be opened for use as soon as the tests or requisite intervention makes it safe and secure to do so.

“The government, through this statement, appeals to all road users along these corridors to drive safely and patiently by following the traffic advice while assuring them that any inconvenience this may cause is temporary.”

Related Topics:airportLagosTanker explosion
Up Next