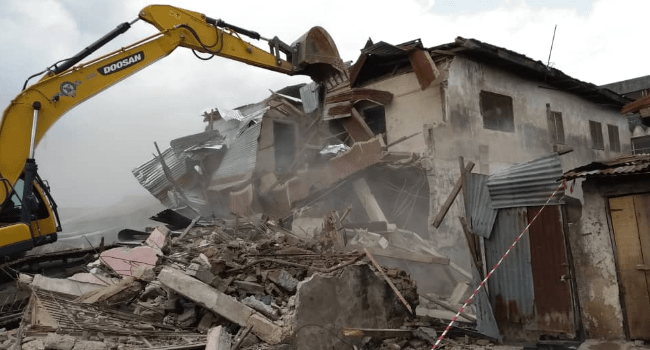 The affected buildings were located at 52 and 54 Bamgbose Street, Lagos Island.

The exercise was carried out by the state government to prevent building collapse and possible loss of lives and properties in the area.

The structures, a three-storey and storey buildings, were demolished through a controlled mechanism carried out by the Lagos State Emergency Management Agency (LASEMA) and supervised by the Lagos State Building Control Agency (LASBCA), the Material Testing and Laboratory Agency and the coordinating Ministry of Physical Planning and Urban Development.

The Managing Director of LASEMA, Dr. Femi Oke-Osanyintolu, said in a statement on Saturday, that the exercise was in line with Governor Babajide Sanwo-Olu’s resolve to protect lives and properties of Lagosians.

Oke-Osanyintolu said LASEMA officials brought down one of the buildings at 11:30 p.m. on Friday as part of early warnings response mechanism.

He said: “The three-storey building located at 54, Bamgbose Street owned by the Masha family, was on Friday, December 13th, 2019, taken to ground zero.

“In the same development two days earlier, the defective one – storey building located next door, at 52, Bamgbose Street on the Island owned by the Olorunkoya family, was also brought down to ground zero on Wednesday, December 11, 2019, The buildings had their roofs removed by the owners sometime ago, in order to force recalcitrant tenants to vacate the property.”

Oke-Osanyitolu, restated the agency’s commitment to Governor Sanwo-Olu’s vision of a safer Lagos, where the safety of lives occupied a prime place in the administration’s agenda.

He said the government had resolved to redevelop Lagos Island which had several buildings built over 100 years ago.

The LASEMA chief added: “Input has been sought from LASBCA, the Material Testing Agency and Ministry of Urban and Physical Planning, in order for them to carry out stress tests to ascertain the integrity of the buildings.

“After thorough investigations, the Commissioner for Physical Planning and Urban Development, Idris Salako, The General Manager, LABSCA and Material Testing Agency, have given concurrence that the houses should be taken to ground zero.

“Consequently, tenants of the. buildings, numbering over100 were given five days to vacate the premises for their own safety before the structures were eventually brought down.”