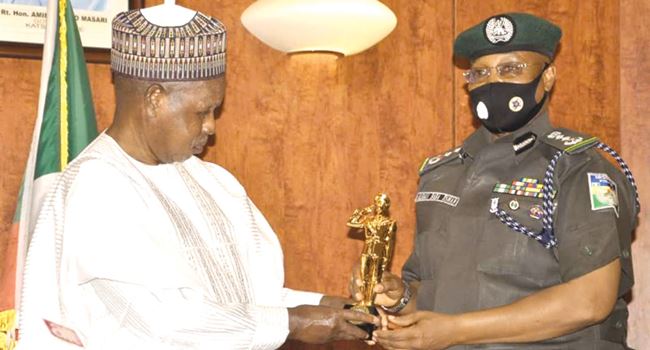 The Katsina State Governor, Aminu Bello Masari has bemoaned the limited resources available to the Nigerian Police Force in its fight against crime and insecurity.

It is practically impossible for the police to be effective in safeguarding the lives and properties of citizens in Katsina State as the ratio amounts to one police officer to 260,000 citizens, the Governor noted.

Masari made the remarks on Thursday while responding to the Inspector General of Police IGP, Usman Alkali Baba who paid him a courtesy visit at the state government house.

“For people to understand the reality of the condition under which the police are working, we are supposed to look and analyse the situation, interrogate the number and the resources and then come up with constructive suggestions on how to make police works.

“Katsina like I said before in 2006, had a population of 5.6 million. If we are growing at 3%, fifteen years after, we should be crawling to 8 million people. Then, we should ask ourselves, how many policemen do we have in Katsina State?

“Then looking at arms and ammunitions, what do they have? You, look at it.

“That brings us to the issue of modern technology and equipment for fighting crime- war. How much technology is available to the police?

“I always tell people, policemen, military men, that anyone in uniform has blood and flesh and of course, by the nature of their training, by the career they have chosen, they have chosen to sacrifice the ultimate, if need be, though they are human beings like us.”

Related Topics:MasariPolice force
Up Next

Minister refutes reports of recruitment of 400,000 personnel into Police Force