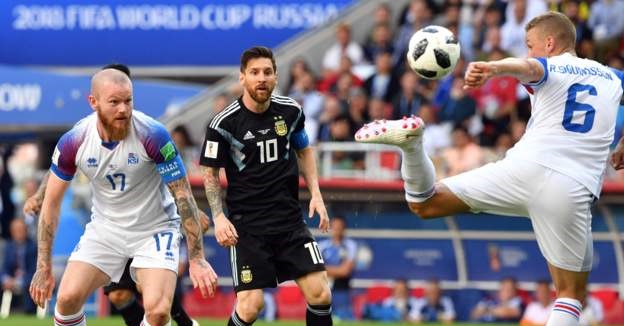 Lionel Messi missed a chance to seal victory for Argentina as he failed to convert a second-half penalty in their 2018 FIFA World Cup opener against Iceland at the Spartak Stadium in Moscow, Russia on Saturday.

The South Americans, favourites to advance from Group D, were held to a 1-1 draw by debutants Iceland who put up a spirited fight against the two-time champions.

Manchester City’s Sergio Aguero opened the scoring to put Argentina ahead in the 19th minute, but the lead did not last long as Iceland leveled just four minutes later from a superb shot by Alfreð Finnbogason.

After several missed chances for both sides, Argentina were presented with a clean opportunity to take the lead when Messi was brought down in the box in the 64th minute.

But goalkeeper Hannes Halldorsson – the most valuable player in the game – fled to his right to push away the penalty taken by Messi.

The Barcelona forward did win a free kick 10 minutes after and also in injury time, but his strikes hit the wall as his frustration continued until the final whistle. Iceland successfully snatched a point from the tie to the amazement of all.

The other group game between the Super Eagles of Nigeria and Croatia holds later on Saturday at the Kaliningrad Stadium.