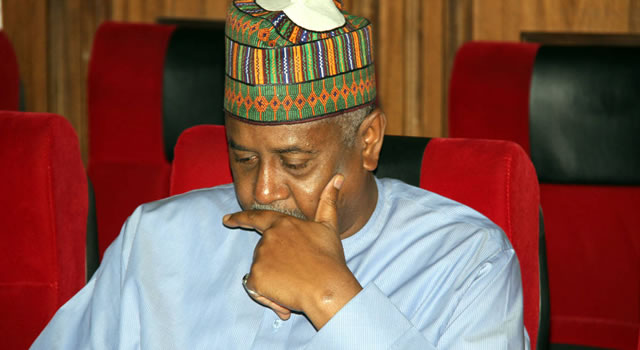 The day’s trial resumed with a prosecuting witness, Hassan Seidu, during the continuation of trial in- chief, telling the court presided over by Justice Okon Abang, how Ashinze transfered millions of Naira to several bank accounts.

He narrated how the Economic and Financial Crimes Commission (EFCC) was able to recover exhibit (i) 43 and (i) 44, containing alleged money transfers and lists of beneficiaries and their account numbers in the course of investigation.

Seidu was led in evidence by prosecution counsel, Offem Uket.

He told the court that exhibit (i) 44 is one paper document written with red ink, dated April 17, 2014, and that the documents have account numbers of individuals, Corporate organizations and Non Governmental Organisations (NGOs).

He revealed that the amount of money written on the list in the document was found to be exactly the amount transferred to the various banks, through Geonel Integrated Service Ltd’s accounts in Enterprise Bank, now Heritage bank.

The prosecution witness also explained that N120 million was transferred from Geonel account in Enterprise Bank, now Heritage Bank, to the account of Unity Continental in Zenith Bank, represented by the first defendant.

Seidu said that among the list of names mentioned in exhibit (i) 44, it was only Helpline Organization’s transactions that was transferred on Bank instruction.

He added that N1.390 billion which was contained on the exhibit document was the same amounts on the red ink which were transferred by Geonel Integrated to the listed accounts.

According to him, further investigation revealed that the names of the persons, entities and NGO were supplied by the officials in the office of the NSA to Nicholas Ashinze, the first defendant.

According to Seidu, several items were discovered during the execution of search warrant at Nicholas Ashinze residence on N0. 67, Vision Court Estate, Apo Abuja.

Counsel to the first defendant, Ernest Nwoye, however, objected when the prosecution counsel tendered the Exhibit (i) 43, in evidence.

According to Nwoye, Section 36, subsection 6a, of the 1999, Constitution, stated that a defendant, “shall be given adequate time and facility for the preparation of his intent, been that the documents were never part of the documents initially tendered in evidence to avoid surprises in court”.

Justice Abang, thereafter, adjourned till May 7 and 8, 2020, for continuation of hearing and to enable the prosecution to further respond to the argument before the Court.

Despite boycott by opposition, Guinea set to go ahead with contested polls