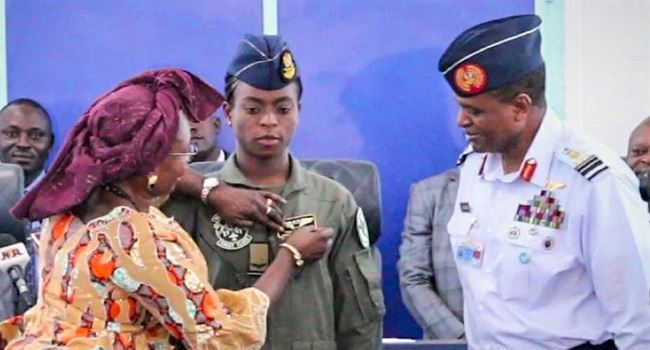 The Nigerian Air Force on Tuesday made history, when it inducted its first female fighter pilot in its 55-year history.

The female fighter pilot, Kafayat Sanni and Tolulope Arotile, the First Female Helicopter Pilot, trained in the United States and South Africa respectively were inducted among the 13 new fighter pilots at the NAF Headquarters, Abuja, on Tuesday in a ceremony attended by the Minister of Women Affairs, Mrs Pauline Tallen.

They would be expected to be deployed in the North-East to fight Boko Haram terrorists, and for security operations in other parts of the country.

The Chief of the Air Staff, Air Marshal Sadique Abubakar, while commending the female officers, explained that 101 pilots had been inducted since 2015 while another 111 personnel were undergoing training.

“The first female fighter pilot trained at the US Air Force, following an excellent performance during her initial flying training course at 401 Flying Training School in Kaduna, while the second graduated from Starlite International Training Academy. They both performed well during their training.

“Our records indicate that we have trained a total of 67 instructor pilots since 2015. Furthermore, with the winging of these pilots today, the NAF would have winged a total of 101 pilots within the same period.

“Currently, we have 61 pilots undergoing ab-initio/basic flying training, while 50 are undergoing various advanced flying training courses both locally and abroad. More so, with the NAF preparing to receive two additional helicopter gunships, our counter-insurgency efforts will soon be greatly enhanced.”

The Minister of Women Affairs, Mrs Pauline Tallen, while speaking, lauded the female pilots. She also expressed confidence that the new pilots would help to curtail the “current security challenges facing the North-East and North-West as well as communal clashes, kidnapping and banditry”.