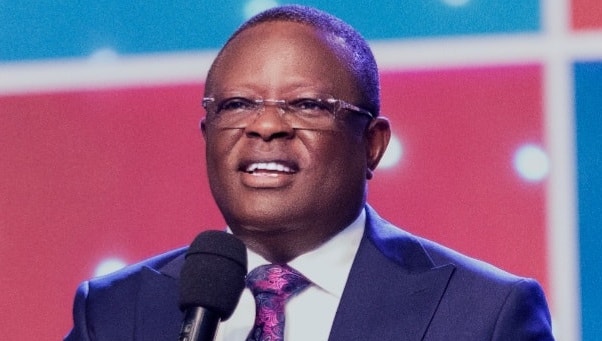 The Nigerian Bar Association (NBA), has taken exception to what it said were derogatory comments by Ebonyi State Governor, Dave Umahi, against the judiciary after his sacking by a Federal High Court in Abuja on Tuesday.

Umahi had, following the ruling by Justice Inyang Ekwo, described the judgement as “jungle justice,” and the judge as an “hatchet man” who had been bought over by the Peoples Democratic Party (PDP).

He added that the court could not remove him from office as he was still the governor of the state.

“Nobody can remove me as the governor of the state as we know where the judgement came from.

“The constitution stipulates that the only way a governor can be removed from office is through death, resignation or impeachment by the state House of Assembly.

“There is no constitutional provision that empowers a hatchet man to turn the constitution or law of the land on its head,” Umahi had said.

But in reaction to Umahi’s accusation, the NBA, in a statement on Wednesday by its President, Olumide Akpata, lambasted Umahi for refusing to obey a court order which has asked him to vacate office as governor of the state.

Describing Umahi’s response to the judgement as “impunity of the highest order and executive rascality taken too far,” the NBA said such comments coming from a man who wants to be President were “rather unfortunate.”

“The Nigerian Bar Association (NBA), notes with utter dismay, the unfortunate and totally unacceptable reaction of His Excellency, Dave Umahi, to the judgment of the Federal High Court, Abuja, delivered on 8th March, 2022, coram Honourable Justice Inyang Ekwo, which inter-alia, ordered him and H.E. Mr. Eric Kelechi Igwe to vacate the offices of Governor and Deputy Governor, respectively, of Ebonyi State on grounds of their defection from the Peoples’ Democratic Party to the All Progressives Congress.

“Following the judgment, Umahi, in the course of a press conference, video evidence of which is currently making the rounds on both new and mainstream media, threw caution to the wind and deployed very uncomplimentary adjectives and intemperate language in characterising both the Judgment and Hon. Justice Ekwo, including but not limited to describing the Judgment as “jungle justice” and His Lordship as “a hatchet man”.

“As if these were not enough, Engr. Umahi accused the Court of “murdering justice” and also arrogated to himself the judicial powers and magisterial authority to declare the judgment of a court of competent jurisdiction as null and void while unashamedly declaring his intention to disregard the Judgment in favour of another.

“To put it plainly, this is impunity of the highest order and executive rascality taken too far.

“While the NBA has absolutely no interest in the outcome of the case in question and will continue to stay away from partisan politics, it is inconceivable that this Association that is charged with upholding the rule of law and defending the judiciary, would sit idly by in the face of this unprovoked and totally unwarranted attack on the judiciary.

“Indeed, the leadership of the NBA has been inundated with calls from a cross-section of well meaning Nigerians who are understandably outraged by the utterances of Engr. Dave Umahi and who have rightly demanded that appropriate action be taken to protect the sanctity of the judiciary.

“It is for this reason that we condemn without equivocation, Engr. Umahi’s unfortunate diatribe which, if it had emanated from an average litigant, would still have been regarded as shocking but coming from one who occupies the exalted office of a State Governor, is nothing short of a national embarrassment.

“In the wake of the judgment, one would have expected Engr. Umahi to sue for calm from his supporters and to assure them that all legal and constitutional avenues would be explored to challenge the judgment.

“For H.E. Engr. Umahi to instead resort to attacking and denigrating the high office of a Judge in this unprecedented manner is disgraceful, undemocratic and completely unacceptable.

“In light of the foregoing, the NBA hereby demands an immediate apology from H.E. Engr. Dave Umahi, and a retraction of the comments he made against the person and
judgment of the Hon. Justice Inyang Ekwo of the Federal High Court.

“It is also our demand that this apology and retraction be given as much media coverage as the press conference where the unfortunate comments were made.”