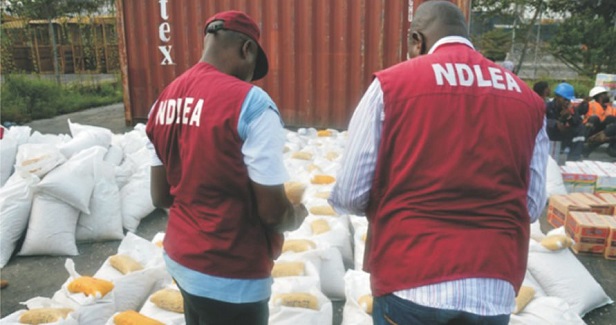 The National Drug Law Enforcement Agency (NDLEA) on Wednesday said its operatives had seized a vehicle loaded with 500kg of Indian hemp in Ilorin, Kwara State.

The agency also revealed that an Indian hemp farmland was destroyed in Ilorin.

The Kwara Commander of NDLEA, Ambrose Umoru, revealed the development during a press conference in Ilorin.
He said five suspects were arrested in the process of intercepting the vehicle.

Umoru also added that the vehicle with registration number, Kano GWL 28XA, was intercepted on Sept. 25 on the Jebba-Mokwa expressway.

According to him, the driver of the vehicle with his accomplice concealed the exhibit with other items in the vehicle heading to the northern part of the country.
“Based on a tip-off from a confidential informant, the operatives gave the truck a hot chase in the course of a motorised patrol on the expressway,” he said.

Umoru also revealed that the driver upon arrest confessed that they loaded the exhibit at Akinyele motor park in Ibadan.

According to him, the driver, who was billed to deliver the hard drug in Bida, Niger, refused to disclose the specific recipient in Bida.

Umoru said that investigation revealed that the driver specialised in using the truck, which belongs to a Chinese company, to convey Indian hemp from the western part of the country to the North.

“The driver cleverly concealed the recovered exhibit in condemned rubber slippers and shoes loaded along with bags of garri,” he said.

Umoru said that the command also apprehended an Indian hemp farmer at Kulende area of Ilorin.

He said the suspect was arrested based on a tip-off and the farm destroyed with 12kg of Indian hemp recovered for his prosecution.

The commander said that the farmland was the first discovery in Kwara by the agency.

He said the discovery was an indication that some unscrupulous persons may be engaging in illegal farming of Indian hemp in Ilorin and some other parts of the state.

He, however, urged residents not to allow Kwara to become one of the Indian hemp producing states in the country.

He called on farmers, hunters and other residents to report any Indian hemp farm sighted, adding that the command would continue to work assiduously to keep Kwara drug-free.