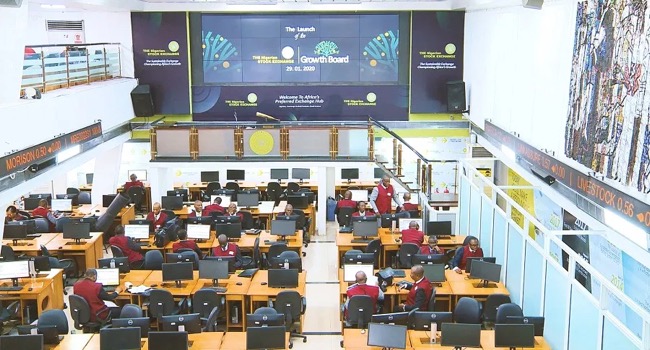 According to the NGX market report, by measure of volume, the Financial Services Industry recorded 445.324 million shares valued at N3.676 billion traded in 7,560 deals.

At the end of this week’s trading, Honeywell Flour Mill Plc, Transnational Corporation of Nigeria Plc (Transcorp) and Guaranty Trust Holding Company Plc (GTCO) were the top three equities by measure of volume.

Honeywell Flour Mill, Transcorp and GTCO accounted for 203.753 million shares worth N 1.964 billion in 2,515 deals. The three companies accounted for 23.51 percent and 16.02 percent to the total equity turnover volume and value respectively.

Pharmdeko stock value was up by N0.53kobo as the share price ended the week with N1.72kobo per share against the N1.19kobo it opened with.

Courtville closed the week with N0.31kobo per share, rising by 29.17 percent to move above its opening of N0.24kobo per share.

Neimeth was part of the gainers list as its stock price rose by N0.41kobo to move from its opening of N1.64kobo to end the week with N2.05 per share.

BOC Gas appreciated by N1.90kobo during the week as its share price rose to N11.10kobo per share against the N9.20kobo that it started this week with.

Meyer topped the losers list following a loss of N0.39kobo, which reduced its stock value to N0.20kobo at the end of trading, from N0.59kobo.

SCOA share price dropped to N1.59kobo by end of trade this week, having depreciated by 18.46 percent from its opening share price of N1.95kobo.

FTN Cocoa share value also fell during the week, losing 9.09 percent from its opening stock price of N0.44kobo, to end trading with N0.40kobo per share.