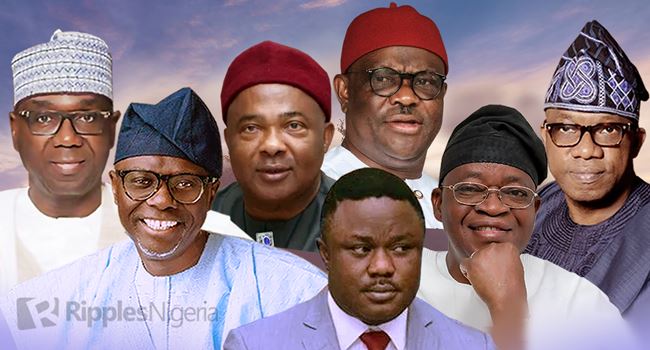 The Board of Ripples Nigeria appraises yet again, like it had done every month since August 2019, the performance of Nigerian Governors for the month ending October 31, 2020.

The defining parameters have always been to measure, among others, the impact of a unique policy initiative or programme executed by any Nigerian governor during the month under review.

The Board, mindful of the fact that governance is a daunting task, believes that the everyday challenges should provide enough motivation for the state chief executives to creatively prove their mettle in harnessing the resources at their disposal for the larger good.

While some have shown exceptional capacity, others have struggled with the mandate thrust on them.

In August 2020, the political space threw up ten state governors who were ranked on Ripples Nigeria traditional template of Top Five, Bottom Five.

For the month of September, Governor Babagana Zulum of Borno State appeared as a lone star, basically because he stood out among his peers who, in the course of the month, were very ordinary in their performance.

The lackluster outing was common to all the governors in October as none had any spectacular policy initiative or programme to his name.

Indeed, the month which birthed the #EndSARS protests revealed the underbelly of the Nigerian state in terms of mis-governance. The attendant violence and looting that enveloped most part of the country exposed the wanton disrespect most of the elected leaders had for citizens.

We are concerned that several Nigerian governors were unable to respond or contain the agitations of Nigerian youths because they were short on moral standings and lacked the guts to confront the issues, universally accepted as germane to the survival and future of the nation.

Though we recognize that most of the demands of the #EndSARS protesters are under the purview of the Federal Government, we are no less convinced that the level of misrule in the States was the ultimate trigger for the widespread violence, looting and destruction that followed.

We are appalled at the seeming lack of concern exhibited by some governors who, believing that the popular agitations should be contained, played the ethnic card to give the October events a regional colouration.

Many believe that most governors in the country’s northern region were excessively guilty of this. Indeed, the nineteen of them, rather than look at the crisis wholesomely and offer progressive solutions, chose to call for a restriction on the use of social media in the country, a move capable of worsening the current mistrust between the government and Nigerian youths.

In other cases, some governors looked not to have ideas or acumen to take on the challenge of dealing with an uprising. They were either too conceited or worked in concert with the state to effect a brutal repression of the protest. Many find ready example of these developments in Lagos and Rivers State.

The case of Lagos State is particularly noteworthy for the inconsistencies that have dominated the testimonies shared by the military and Governor Babajide Sanwo-Olu.

We also observed with dismay the attempt by some governors to cash in on the #EndSARS protests to score cheap political points, especially those that used the unfortunate crisis to present themselves as populists.

In the above category is Governor Nyesom Wike of Rivers State who, after banning any form of protest in the state, turned around to address the protesters and ride with the wave. The agitators had defied his order and gathered in front of the Government House in Port Harcourt.

His Kwara State counterpart, Abdulrazaq Abdulrahman, towed the same populist path, trekking several kilometres to the state police command headquarters to address the Commissioner of Police in the state and riding back on a motorcycle. Many reckon that populism was more of the goal, rather than a drive for genuine sustainable management of the crisis.

Oyo State was no less removed from the show-off as Governor Seyi Makinde encouraged near brazen disrespect for order with citizens whipped into frenzy as he barred policemen from interfering with the protests even with Oyo teetering towards violent eruptions.

We reckon that Governor Makinde could have saved the lives of policemen who were killed if he had been more circumspect in his strict advice to the police to stand off.

We also contend that the widespread looting of warehouses containing COVID-19 palliatives across the country is a clear indictment on the leadership, and indicative of the level of poverty and hunger, largely superintended over by the governors.

While we acknowledge that the looting that took place bothered more on criminality, it is our honest belief that such wouldn’t have happened if state governments had conscientiously delivered timeously and transparently on its contract with citizens.

On the whole, we found nothing outstanding in the services delivered by any of the Nigerian governors in October, 2020.