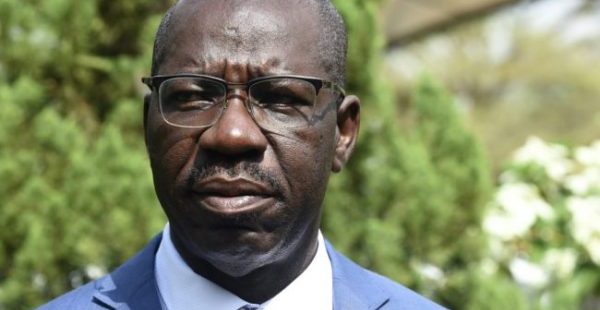 The political tussle of supremacy in Edo State, for those of us who are concerned citizens, can best be described as an attempt by some retrogressive forces to truncate the hardworking governor’s populist agenda. It is important to remind ourselves that Godwin Obaseki’s emergence as governor of Edo State was largely due to his sound understanding of the socio-economic and political challenges of the state.

As a matter of fact, before he became governor, Obaseki was the Chairman of Oshiomhole’s Economic Team, a position he held for eight years, ensuring that the developmental blueprint he had conceptualized for the previous government was executed to the letter. It therefore baffles us that the same Oshiomhole would turn around to bite the finger that fed him with creative ideas. Obaseki’s only ‘sin’ is that he would not allow himself to be manipulated on the altar of political witchcraft by any godfather or principality.

Unknown to many, Chief Lucky Igbinedion it was who enthroned Oshiomhole as governor of the state then. In his usual magnanimous nature, Igbinedion had rallied some of us, his close friends, to raise funds for marketing the Oshiomhole candidacy. I remember the last meeting we held at the residence of Francis Osazuwa. That meeting was attended by Pastor Osagie Ize-Iyamu, Captain Hosa Okunbor, Mr Lucky James, Barrister Osarodion Ogie Chief Tom Ikimi and Oshiomhole himself. We were able to raise hundreds of millions of naira. Alas, Oshiomhole cannot say he has done anything to reward anyone of us. Obaseki also played his own part. Unknown to people, Oshiomhole had many cells financing him.

Former Political Adviser to Adams Oshiomhole, Mr Charles Idahosa, also corroborated the foregoing. According to him, “It was Obaseki that brought other people to do a launching, that was the seed money, hundreds of millions of naira that Obaseki raised for Oshiomhole to come to Benin and pursue his governorship ambition, incidentally, against me, because I ran that ticket with him.”

In an opinion article titled What Are Obaseki’s Sins ? published in Leadership newspaper of Saturday, July 20, 2019, the writer, Paul Useni, aptly captured the current situation of things in Edo State while reiterating the fact that Obaseki’s achievements are visible, even to the blind and politically naive: “In spite of his monumental achievements, however while the generality of the people rejoices with the Wake and See governor, some few persons that have always placed their personal interests before that of the populace, have seen reason to heat up the polity and distract the hardworking governor. Unfortunately, these people who have turned themselves to landlords of the state, were frontrunners in the fight against godfatherism…”

Godwin Obaseki has done creditably well. He has managed the funds of the state in a manner that has made it possible for projects to be executed with low budgets. During the last local government elections, his Cost Management skills came into play, as he was able to execute the elections with only twenty percent of the total budget, thereby saving cost and ensuring that other areas of need are given attention. More so, virtually all members of his cabinet are square pegs in square holes. He does not patronize mediocrity neither does he share the detestable notion that his position as governor should be an opportunity for family, friends and acquaintances to have tea parties at the expense of state funds.

During a meeting with members of the Benin Community in the FCT on Friday, July 19, 2019, Obaseki said, “Edo is for Edo people, not for individuals, no matter who they think they are: we all will play our roles and leave. What will remain is our state. So, I have said it, that at the end of the day, I only have one mandate to serve Edo people as long as God has given me this opportunity, I will not allow Edo State to be a pawn in anybody’s political chess game.”

And as the political battle of wits continue in our dear state, one reality remains certain: governor Obaseki will not be cowed into surrendering the mandate given to him by Edo people to a group of selfish individuals whose main interest is to divide and rule the state with a remote-control mechanism. So far, the two chambers of the National Assembly are singing discordant tunes concerning the political imbroglio in Edo State. We hope they do the right thing without fear or bias. On our own part as concerned citizens, we shall continue to speak truth to power while championing causes that inspire good governance, no matter whose ox is gored. For our brothers in Abuja, (the 12 members of the Edo State House of Assembly) they should return home and be sworn in.